Luke Durbridge nabbed his first win of the 2014 season, and the second for his ORICA-GreenEDGE team on day three of the Mitchelton Bay Cycling Classic in Geelong. Durbridge sprinted to victory ahead of Pat Shaw (Satalyst), after their two-man move emerged from an early break and to held off the field into the final.

“The whole team rode a superb tactical race today,” said Sport Director Matt Wilson. “Durbridge showed for the third day in a row how strong he is and what great form he has at the moment. He got a win today as reward for those three days of super hard work. He really deserved it.”

It was the second consecutive victory for Durbridge on the undulating Portarlington course, after he won this stage at last year’s edition of the race.

“I’ve won here before, so I know this is a course that suits me and suits the breakaway,” said Durbridge. “I have been feeling good so far at this race, and I knew today was my best shot at taking a stage, so I really planned to go for the win.”

After strong performances by Durbridge in the first two days of racing in Geelong, the team went into today’s stage with a plan to support the young Aussie in his goal of a repeat win on the Portarlington circuit.

“The plan was for Durbo to get up the road and go for the stage win today, and for Gossy to get enough points to hold onto the jersey,” said Wilson. “Half of that plan worked out, so we are very happy.”

“The plan was for me to get away early, so it was good to get into a move with a group of about ten guys,” added Durbridge. “But that break wasn’t working well together, so I decided to attack and go it alone for the win. I felt pretty confident going into the final with Shaw, but I’m obviously really happy I could finish it off and get another win on this course.”

In what was an especially aggressive day of racing on the tough and characteristically windy Portarlington circuit, multiple riders launched attacks from the bunch in an effort to reel in the two-man break that led for the majority of the stage. The fast-pace resulted in a shake-up of the General Classification, with Zak Dempster (SASI) regaining possession of the jersey. Matt Goss slipped to fourth place behind Durbridge, who moved into third after today’s win.

“It was a super aggressive day today,” said Wilson. “Durbridge and Shaw got close to lapping the field behind, that’s how well they worked together. That caused a huge commotion in the bunch, and the boys really struggled to control it. The attacks were just so rapid, but they did a great job. Gossy didn’t score any points today, but with the likely bunch sprint tomorrow, we’re confident he can get the jersey back.” 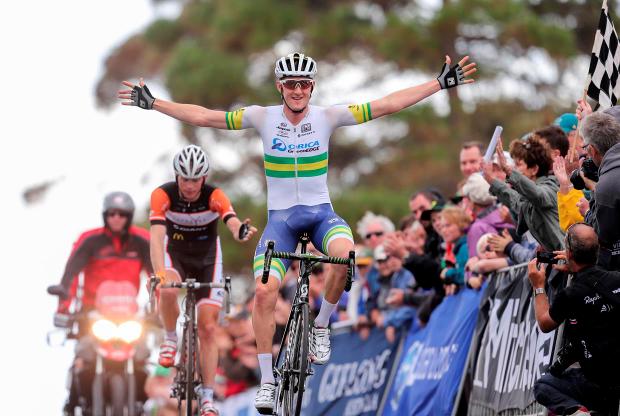