DuVine Cycling + Adventure Co. – the global leader in premier bicycle vacations – adds Ireland to its European bike tour destinations. The new cycling holiday will take place along the southern Wild Atlantic Way from Dingle to Killarney and will include the most coastal riding available in the region.

DuVine Cycling + Adventure Co, the global leader in premier bicycle vacations, has launched its new Ireland bike tour. For six days and five nights, guests will enjoy 128 miles of cycling on the breathtaking coast known as the Wild Atlantic Way. This peninsula-hopping itinerary covers more of this scenic coastline than any other bike tour offered in the region. Inaugural small group departures are available in the months of May, June and September of 2015, while private tours to the destination may be developed at any time for any size group. 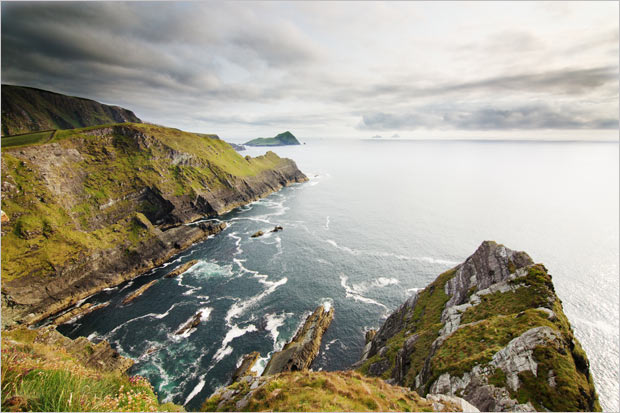 DuVine’s hand-crafted Ireland Bike Tour will guide travelers through the picturesque Dingle, Iveragh and Beara Peninsulas as well as the Ring of Kerry and Killarney National Park. Key highlights of the trip include:

• Cycling along the Wild Atlantic Way overlooking sparking seas and valleys adorned with castle ruins, stone walls, and sheep-studded fields
• Savoring a pint of Crean’s Lager, a local beer paying homage to the Irish Antarctic hero and explorer Tom Crean
• Sampling freshly made chocolates at one of our stops on the Ring of Kerry at Skelligs Chocolate
• Immersing yourself in the Gaelic culture, language, and traditions
• Exploring historic sites: Gallarus Oratory and Castle, Ross Castle, Iron Age Forts, and the village of Caherdaniel
• Journeying through Ireland’s highest mountain range: Macgillycuddy’s Reeks
• Eating fresh local seafood, artisanal cheeses, mashy peas, and shepherd’s pie
• Mingling with locals in Dingle while enjoying an evening of traditional music and local whiskey
• Venturing to Slea Head, Europe’s most western point
• Staying at the boutique Castlewood House, the beautiful Parknasilla Resort + Spa, and the and the historic Malton hotel

For full details about this trip, visit: https://www.duvine.com/tours/1874/Ireland-Bike-Tour

Ireland is the third Gaelic itinerary added to DuVine’s portfolio of luxury cycling vacations, following Scotland, United Kingdom and Brittany, France. Despite a reputation for rain, these Gaelic destinations are ideal for cycling. According to DuVine’s Ireland Trip Designer, Stephane Dumont, “[The Dingle Peninsula] feels like many of the roads were designed by cyclists rather than engineers; guaranteed to put a smile on the face of anyone who is lucky enough to ride here.” The area’s cool temperatures ensure a comfortable ride, and the brief, light rain showers are more of a refreshing treat during a day of cycling.

Direct flights from Boston, New York, Toronto, San Francisco, Chicago and other major North American cities make traveling to Ireland an easy getaway. Additionally, DuVine offers Concierge Travel Planning assistance to take all the stress out of managing the travel arrangements outside of the bike tour. This service assists travelers with hotel reservations, private transfers, train tickets, car rentals, and city tours. With DuVine’s expert staff taking care of the details, travelers can relax and focus on getting excited for their upcoming vacation. With departures fast approaching, now is the time to secure space on DuVine’s Ireland Bike Tour.

About DuVine Cycling + Adventure Co. | https://www.duvine.com
DuVine Cycling and Adventure Company is the only global bike tour company that does one thing – bike tours. This focused energy allows DuVine to design and lead the world’s most incredible cycling vacations. Since 1996, DuVine has been opening doors to exclusive boutique experiences all over the world– from the rolling hills of Tuscany and storied medieval villages of Provence to the Andean foothills of Argentina’s wine country and the lush vineyards of Sonoma. DuVine believes that travel should embrace spontaneity, which is why they employ guides with local connections and empower them to be the most flexible in the industry. True luxury is service that anticipates a traveler’s needs, access to one-of-a-kind experiences, and the freedom of limitless discovery. True luxury is what DuVine offers on every one of its bicycle vacations.