Alamo Plaza, home of one of the most iconic sites in American history, served as the backdrop today for Red Bull Last Stand, an eliminator style criterium road race that took place at the Alamo Plaza in downtown San Antonio. The race featured some of the fastest male and female cyclists in both geared and fixed divisions, thrilling a crowd of 15,000 spectators. 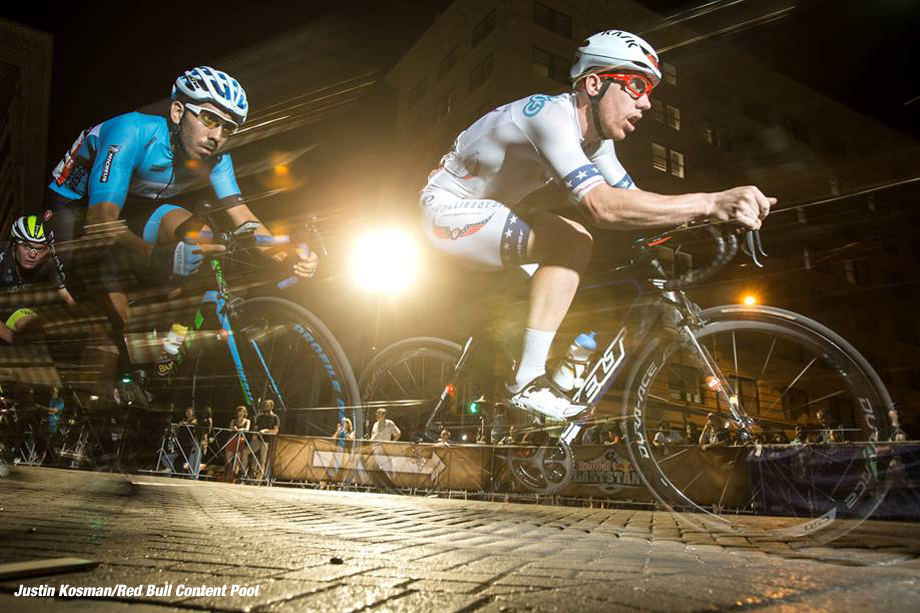 In the eliminator format only the strongest survive. The slowest rider each lap is taken out of the race until one winner outlasts the competition, which makes for tense, dramatic racing that leaves little room for error. This was certainly the case today, especially considering riders were speeding at approximately 40 mph around the nine challenging turns of the 820 meter track around Alamo Plaza.

The first race of the day was the Fixed Gear Women’s event, which saw San Diego’s Gretchen Stumhofer as the last woman standing. She finished 11th in Qualifying earlier in the day, saving some energy and bullets to leave in the chamber for the Finals, a strategy which paid off well. “Today felt awesome. It’s my last event of the year and I’m thrilled to finish the season off well in such a great city. Riding around Alamo Plaza was unreal.”

The Fixed Geared Men’s race was next, and Texas’ own Colin Strickland dominated the stacked field, almost lapping the next fastest racer. The Austin based Strickland bested major competition, including the likes of Addison Zawada, Daniel Holloway, and Travis McCabe in what could very well be the biggest and most impressive win of his stellar career. He finished 1st overall in qualifying and led the entire Finals.

Colin was happy to put on such a show in his home state. “It was awesome to win here. I’m a huge fan of San Antonio, it’s such a beautiful city. It was refreshing to ride in a different city with so much history and architecture, and having this many people come out to support was incredible.”

Next it was time for the geared cyclists to shine with the Geared Women’s competition. Pennsylvania’s Colleen Gulick took the lead midway through the race and despite other cyclists at her heels she held on to take home the win. She was able to take the victory after finishing 2nd overall in the Fixed Gear race earlier in the day. Gretchen Stumhofer added another podium finish under her belt as well, finishing in 3rd place.

The finale was the Geared Men’s event, which saw German born Austin resident Stefon Rothe take home the win in the biggest surprise of the day. The underdog put on his best performance ever, outdueling the likes of Travis McCabe and 2nd place finisher Daniel Holloway. He was in the zone the entire race, and knew with about 15 laps left the race was his to lose after building a 20 second gap.

It was an action packed afternoon in a surreal environment, as one of the country’s most historic landmarks acted as the backdrop on what was a beautiful San Antonio day. City Councilman Roberto C. Treviño was happy to host the race; “I couldn’t be more thrilled to see such an amazing and successful event like Red Bull Last Stand. I appreciate how the race speaks to the momentum of the city being seen as a vibrant, active and historic place.”

The Most Beautiful Cycle Routes In Europe