Elise Delzenne Has Retired From Cycling

Elise Delzenne (28) has retired from cycling. After the World Championships in Bergen she rode her last laps on the track at the European Championships in Berlin. Two years ago Elise chose to come to Lotto Soudal after she had ridden one season for Specialized – lululemon and one year for Velocio – Sram. Before, Elise had studied to become a textile engineer and since this week she has started her new job.

Elise Delzenne: “I felt it was time to start a new chapter of my life. I took this decision before the summer. Afterwards I did all I could to ride a good last season. In Bergen I realized it was my last road race ever and I wanted to enjoy that moment. The European Track Championships were my final track race. Unfortunately I didn’t have the best preparation. During a training with the girls for the team pursuit we crashed, two weeks before the European Championships. I had to go to hospital to remove splinters from my arm. At the European Championships we got fourth and I think bronze would have been possible without that crash.”

“I am looking back with a smile on the two seasons that I rode for Lotto Soudal. I had a great time in this team. I had a good bond with my teammates and there was always a very good atmosphere in the team. This season I won the second stage at the Festival Elsy Jacobs and last year I won the overall classification of Trophée d’Or after I had won the opening time trial. Those are moments I will never forget. I really cherish my victory at Trophée d’Or as it was the result of teamwork. Claudia Lichtenberg, also part of our team, got second.”

During her pro career Elise Delzenne conquered six national titles on the track, in 2013 she became French road champion. In 2015 Elise won Dwars door de Westhoek and the fifth stage of the Czech stage race Gracia Orlová. Last year she won the overall classification of the Trophée d’Or after she had been the fastest in the time trial on day one. This season Elise conquered the victory in the second stage of Festival Elsy Jacobs. She won gold in the scratch race, silver in the individual pursuit and bronze in the team pursuit at the World Cup in Glasgow last year. Two years ago Elise was vice-European champion individual pursuit and points race.

Elise also had her share of bad luck during her career. Last year she fractured her pelvis and two flat tyres prevented her from winning a second national road title in the elite category.

Elise Delzenne: “When I think about the most beautiful moment in my career I have to go back to my French road title as a junior, in 2007. A friend helped me to win that race and we are still good friends. I crashed during the race and when I got back in the bunch she took care of me. She had faith that I could still win the championship and so I did.”

“I am satisfied with my career. I achieved a lot in a short time. After focussing on my studies I chose to put everything on cycling in 2014. I have achieved a number of results that many others who race longer never achieve. Although I don’t forget the difficult times either, because those moments also taught me a lot.” 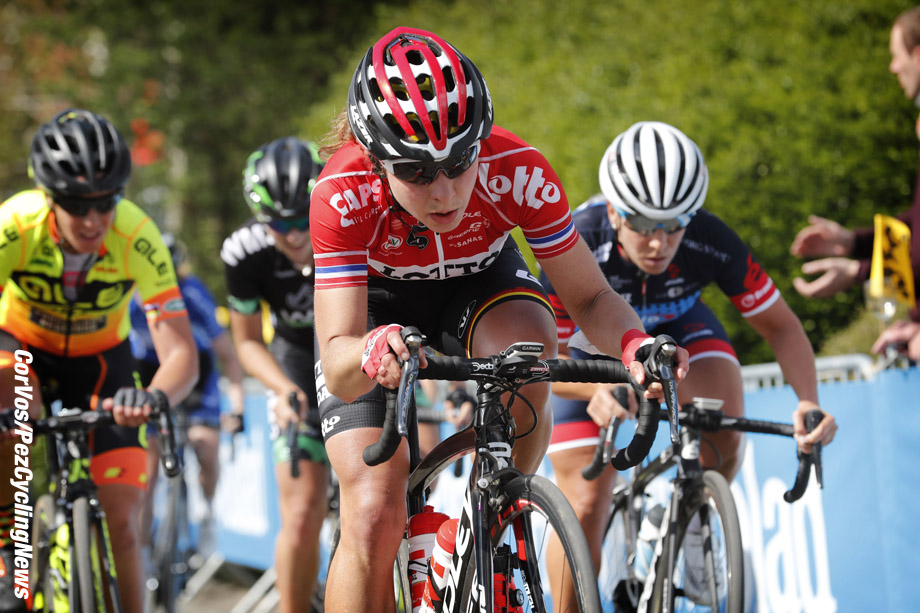 The Tour Hits The Herault!