Emma Johansson won the second stage of Emakumeen Euskal Bira to move into the race leader’s jersey. It is the third win of the season for Johansson who outsprinted Elisa Longo Borghini (Hitec Products UCK) in Aretxabaleta for top honours.

Johansson and Longo Borghini were part of a four rider escape group that included Tiffany Cromwell and Marianne Vos (Rabobank / Liv Giant). The quartet slipped away from the bunch early in the second half of the stage before Longo Borghini and Johansson rode away from Vos and Cromwell on the final climb.

“This is why we’re here,” said Johansson. “This is why I train every day. We chase these wins all year. I’m happy to have taken the stage. I haven’t won many races this year. It’s been a lot of podiums. It’s nice to take the top step. I’d like to think Iñaki [Lejarreta] is looking down on us, smiling to see us win.”

The day proved far more difficult than expected. The skies opened in the middle of the stage, and the wet roads created chaos on the descents between the two categorised climbs.

“Today was a lot more decisive than we thought it would be, but we were ready for it,” said Sport Director Dave McPartland. “We were able to organise and profit from a difficult day.”

“There was a fair bit of traffic and cars on the first circuits,” noted McPartland. “That creates more angst in the bunch. We got through that section relatively easily. The girls covered anything they thought might be threatening.”

“The first difficulty was a category three climb,” McPartland continued. “It wasn’t too hard. As we crested the top of the climb, storms passed through and it began to absolutely pour.”

ORICA-AIS massed at the front as the peloton plunged down the wet roads. McPartland listened as race radio reported repeated crashes. His five riders managed to keep it upright.

“The rain, wet roads and crashes combined to make the race,” McPartland said. “We had a group of four get away with two of our riders in it. It was a dream scenario. Of course, Vos and Longo Borghini always pose a challenge, but we’ll play ball in a situation like that anytime.”

Having established a small gap, Johansson, Cromwell, Longo Borghini and Vos worked well together to grow their advantage. Specialized-lululemon led the chase for Evelyn Stevens. Despite the efforts made by Stevens’ squad, the gap between the breakway and the peloton continued to grow. As the quartet reached the base of the category one climb, they had a 1’20 advantage.

Longo Borghini set a steady tempo up the mountain. Johansson sat second wheel and matched her pedal stroke for pedal stroke as first Cromwell and then Vos fell off the pace.

“The gradient really kicked up in the last three kilometres,” explained McPartland. “Tiff cracked on the first real steep pitch. Twenty seconds later, Vos cracked, too. That was a surprise. We haven’t seen that from her at all this year until today.”

“We were in prime position from the car as we watched the action unfold,” he added. “It was like watching a grand final from the front row. It was awesome. The girls put on a great show.”

Cromwell rode her own pace up the steep gradient and overtook Vos ahead of the summit. She was 40” behind Johansson and Longo Borghini when she reached the top. Stevens and Fabiana Luperini (Faren-Lets Go Finland) had jumped from the peloton on the lower slopes of the mountain and reached Vos in the last kilometre of the ascent. The trio had Cromwell within reach as they began to plummet towards the finish.

“First and second had gone up the road at the point,” said McPartland. “Emma and Elisa were racing for the win. Tiff started the descent with a slim lead over Vos, Stevens and Luperini. The three caught Tiff during the first kilometre of the downhill. Stevens and Luperini were in trouble almost immediately, and Vos and Cromwell ended up riding away from them. It stayed like that for a bit until Vos opened a gap that Tiff couldn’t close. That’s how it stayed until the finish.”

“Elisa and I knew we had to go at it together,” added Johansson. “We couldn’t start playing games. We needed to try to keep the distance between us and the chasers as big as possible. We knew Marianne would take risks on the descent, but we played it safe. We worked together all the way to the line.”

The collaboration discontinued inside the final kilometre as the finish line beckoned. Longo Borghini was the first to open the sprint.

“For Elisa to beat me, she knew she needed to get a jump on me,” said Johansson. “She kicked it off, but I was straight in her wheel. There was a bend at 180 metres, and that’s where I went around her. I’m a faster finisher than Elisa, but you can never be sure. I didn’t relax until I crossed the line first.”

Johansson finished on the same time as Longo Borghini. The duo put in 25” on Vos, who finished in third. Cromwell crossed the line in fourth, 55” behind Johansson. The win put Johansson into yellow, tied on time with Longo Borghini. ORICA-AIS now lead the team classification. Although the mood is celebratory amongst the ORICA-AIS squad, the team recognises that much work remains.

“Tomorrow is the time trial, and I’m going to do what I always do,” said Johansson. “I’ll do my best. I can’t do anything more than that.”

“We’re in the box seat at the moment,” added McPartland. “Now we need to concentrate on the time trial for Emma and Tiff. They both know the course. They rode it last year. Sunday is going to be a hard, hilly stage, but we’re not thinking about that yet.” 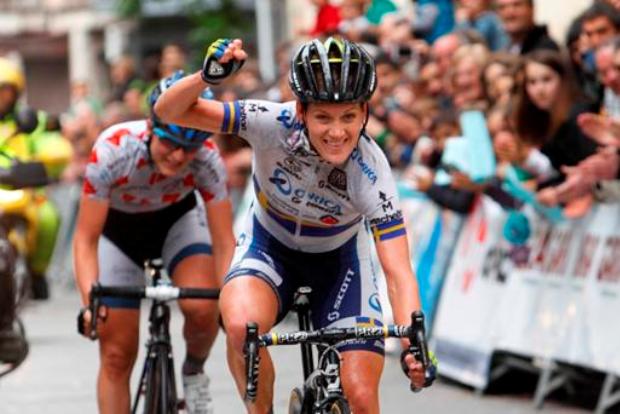