After consistently delivering podium results for the Australian squad, Emma Johansson won a three-up sprint in Gooik to take her well-deserved spot on the top step of the podium. It is the double Swedish National Champion’s first victory in ORICA-AIS colours and her second win of the season.

“I’m very happy,” said Johansson. “I honestly didn’t know if I was going to make it to the finish in that break today. I was so cooked.”

Johansson and Tiffany Cromwell were part of an eight rider escape group that formed over the helligen that peppered the opening loop of Gooik-Geraardsbergen-Gooik. The first hill split the bunch, and all six of the ORICA-AIS riders made the first of three groups that formed. The gaps between the groups solidified over the next climb and on the cobbles. By the time the race had hit the third hill, eight riders had split away from 21 chasers.

The gap stretched out to over a minute during the first local lap of 10.6 kilometres but fell to 36” during the second lap. Despite the fluctuations, no team in the bunch could organise a chase strong enough to shut down the move. By lap three, the gap has pushed out to over one minute again. It would continue to grow as the laps ticked down.

“By lap three, we knew were in the race winning move,” said Cromwell. “Emma and I had a talk, and we decided we would wait until the last lap to attack. We planned to use the bit of a climb after the finish to make our move. We didn’t want to go any earlier because we were both struggling quite a bit. It had been a hard race – a hard three days of racing.”

The decisive action unfolded earlier than expected. On the penultimate lap, Vos accelerated on the hill where Cromwell had planned to make her move one lap later.

“Marianne went on the small climb, and I had to chase her down,” said Cromwell. “When I brought that back, Iris countered straightaway. Luckily, Emma was in the right position to mark Iris. Maaike bridged up to them almost immediately. It was the perfect situation for us.”

“When Marianne went, I thought ‘No. No way. I cannot go,’ ” added Johansson. “I was really on the limit. Tiff was tired, too, but she went after her. Iris countered as soon as Marianne came back to us. She got a small gap, and I knew I had to go after her. Tiff couldn’t do it again. Even though I was cooked, I knew I had to give it everything at that moment. I had just gotten onto to Iris’ wheel when Maaeke came up to us.”

Initially, the trio collaborated in an effort to distance themselves from their former breakmates. As the gap approached 30”, Slappendel began to skip turns.

“Maaeke was keen to work with me, and Iris worked with us initially,” explained Johansson. “I think Iris thought Marianne would ride across to us, so she stopped working at some point. I’m still a bit fuzzy on the details. I was completely at my limit, so a lot of what happened is a bit of a blur.”

“In the last lap, we still had 30” and we realised then Marianne probably wasn’t coming across,” Johansson continued. “Iris attacked, and I shut her down. I tried to get Maaeke to attack after that. I thought if she did, we could make Iris chase. It was better for both of us to make Iris tired for the finish after she had sat on for a bit. Maaeke didn’t attack, and I honestly can’t remember what happened after that until it was time for the sprint. It’s just a black hole. I was hurting a lot.”

“We were altogether when we came in for the final,” explained Johansson. “I kept telling myself ‘Hold it, hold it, hold it. Wait, wait, wait.’ I knew I could beat Iris in the sprint, but I wasn’t sure about Maaeke. I went at 250 metres. I took the corner wide so neither of them could pass me on the outside, and I sprinted straight for the line after that.”

Johansson edged out Polspoel for the win. Slappendel rounded out the podium. Cromwell outkicked her group of five to win the sprint for fourth place.

“Once Emma was up the road, I just had to sit back, cover and relax,” said Cromwell. “My job was to make sure nothing went across, and there wasn’t ever any serious threat.”

“I knew I wanted to be on Vos’ wheel for the sprint, so I shoved my way there,” Cromwell continued. “The speed dropped dramatically as we entered the sprint. We were going so slow. It was still crawling even at 500, 400 metres to go. When we hit 300 metres, I knew I had to jump. I can’t sprint if it’s really slow because I can’t match other people’s accelerations. I took the risk to jump first, and nobody came around me.”

In addition to taking the race win, ORICA-AIS won the overall omnium of the three stand-alone races contested in Holland and Belgium this weekend. Fifth on Friday in Sittard and third on Saturday in Aalburg, Johansson’s win on Sunday sealed her omnium victory.

“It was a successful weekend for the team,” said Johansson. “We raced for this win every day, and we finally got it. I’m very happy to pay back my teammates for giving everything during these three races.” 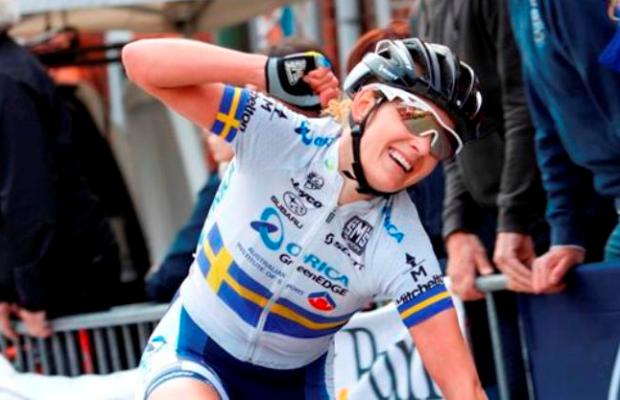 Richeze 2nd in the sprinters battle in Tokyo