The European racing season kicks off this weekend when the 10th edition of Omloop Het Nieuwsblad takes place on Saturday, 28 February. The race marks the opening of the Classics season and will as always be a gruelling test for teams to see how they will shape up after months of preparation. Cobbles, narrow roads, gutters, Côte de Trieu and Paterberg are just some of the obstacles the peloton will face.

Five of the Bigla Pro Cycling Team members for the race have already had some competition this season while for three of the athletes it will be their debut in team colours. Shelley Olds, Doris Schweizer, Lotta Lepistöand Joelle Numainville all raced in the Tour of Qatar while Ashleigh Moolman-Pasio celebrated victory in the South African and African Championships.

The team has just come off a training camp in Girona where they fined tuned their fitness by doing some local races as Sports Director, Manel Lacambra explains below. Annemiek Van Vleuten will see her first bit of racing action this season and will take confidence after finishing in the top ten last year along with Moolman-Pasio.

I’m looking forward to my first race of the season after all the training I’ve done this winter. It is my first winter since 2010/2011 that I’ve had no injuries or operations so I’m curious to see how I will feel on Saturday. For sure I need some races to be in top shape but I did some hard training in Tenerife the past few weeks and the training has made me confident that my shape is ok. We’re a ‘new’ team and it might take a while to get to know each other in races but it would be great to have as many teammates as possible in the final so we have a few cards to play.

We have some riders who love racing the spring classics and especially the cobbles. Nieuwsblad is one of the hardest races of the year and we want to do good. It will be the first race in Europe with the complete team together after the successful campaign in Africa where Ashleigh Moolman-Pasio won five gold medals. We are still growing together as a team but I am confident that we will do good.

During last weeks training camp in Girona, we did some local races to get more intensity done and to get more experience racing together as a team. Some professional men raced with us making it harder and the final average speed in every race was between 43-46km/h. I am pretty happy with what I saw but I know we can and we will need to be better on Saturday. 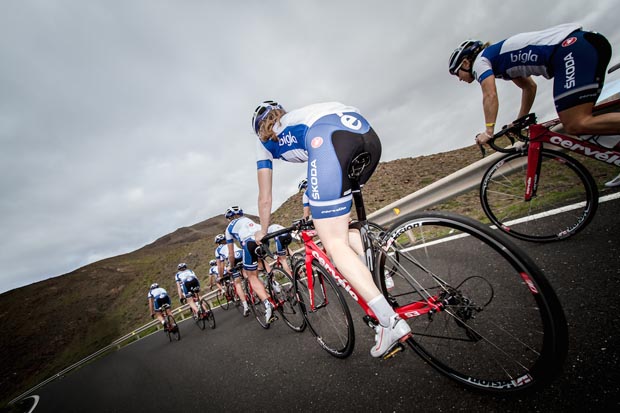 Avila and Duque in the frontline in French weekend