Tour de Pologne to start from Gdansk in the name of Polish Solidarity movement.

Tour de Pologne will start from the historic Gate 2 of the Gdansk Shipyard. Lech Walesa is the Honorary Patron of the start and of the opening race. The starting place is associated with the Polish Solidarity movement and the 25th anniversary of free elections on June 4, 1989. Gdansk Shipyard was the catalyst for the changes that led to these elections and the subsequent fall of the Berlin Wall that brought freedom back to the countries of Central and Eastern Europe. During the weekend of August 30-31, on the 34th anniversary of the August Agreements, the new headquarters of the ECS – European Solidarity Centre will open not far from the launch site for the 71st Tour de Pologne.

“ECS is an extremely ambitious project, the institution of a new formula,” says the director of the Centre Basil Kerski. “It’s not just a museum to promote knowledge of Solidarity and anti-communist opposition in Poland and Europe, but also a center of dialogue about the contemporary world, a meeting place for citizens who feel responsible for the development of democracy. ECS has been operating since 2008, so far it has organized more than 650 projects for children and youth, more than 200 conferences, and nearly 90 concerts and film screenings. The ECS collection contains over 120,000 archival leaflets, posters and documents and more than 41,000 photos. ECS has released 46 books, directed 25 documentaries and organized 24 exhibitions.”

The heart of the new building will be an ECS permanent exhibition, dedicated to the history of the Solidarity movement and the changes that have taken place due to its influence in Europe and around the world. A modern multimedia exhibition will feature around 1800 objects – souvenirs, photos, film footage, archival documents, underground publishing and many others. The last room – a place of silence and reflection – will bear the name of John Paul II.

On the occasion of the Tour de Pologne cycling event, you can see the open-air exhibition located near the historic Gate No. 2 of the Gdansk Shipyard. The exhibition was prepared by ECS and presents events from late 80’s and early 90’s, and also refers to contemporary events – the Arab Spring and the situation in Ukraine. 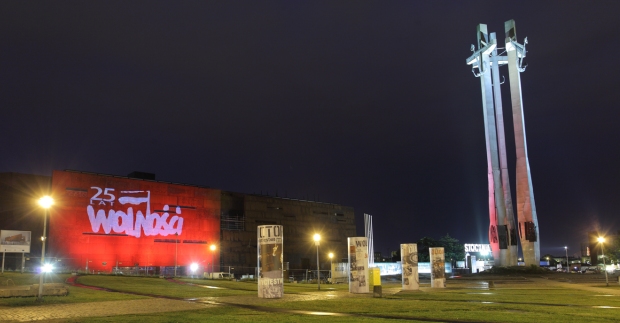