Professional cyclist Phil Gaimon has written a book telling the true story of his unlikely transformation from fat kid to professional bike racer. Pro Cycling on $10 a Day: From Fat Kid to Euro Pro, is now available in bookstores, bike shops, and online. Preview Gaimon’s debut book at www.velopress.com/phil.

Plump, grumpy, slumped on the couch, and going nowhere fast at age 16, Phil Gaimon begin riding a bicycle with the grand ambition of shedding a few pounds before going off to college. He soon fell into racing and discovered he was a natural, riding his way into a pro contract after just one season despite utter ignorance of a century of cycling etiquette. A few hardscrabble seasons later, Gaimon was offered a contract to race in 2014 for Team Garmin-Sharp, an elite cycling team that competes at the sport’s highest level.

Pro Cycling on $10 a Day is a true story, a guide, and a warning to aspiring racers who dream of joining the professional racing circus. Gaimon’s adventures in road rash serve as a hilarious and cautionary tale of frustrating team directors and broken promises. His education in the ways of the peloton, his discouraging negotiations for a better contract, his endless miles crisscrossing America in pursuit of race wins, and his conviction that somewhere just around the corner lies the ticket to the big time fuel this tale of hope and ambition from one of cycling’s best storytellers.

Pro Cycling on $10 a Day chronicles the racer’s daily lot of blood-soaked bandages, sleazy motels, cheap food, and overflowing toilets. But Gaimon also celebrates the true beauty of the sport and the worth of the journey, proving in the end that even among the narrow ranks of world-class professional cycling, there will always be room for a hardworking outsider.

Phil Gaimon is a professional cyclist for Team Garmin-Sharp, a writer, and an entrepreneur who retired from laziness and computer games in 2004 in favor of riding a bike to lose weight. On a whim, he started racing and soon discovered that he was a natural. Phil advanced rapidly through the amateur ranks and turned professional in his second full year. He slowly learned the rules and clawed his way to the top of the American pro ranks, joining Garmin-Sharp in 2014. He maintains a website, www.Philthethrill.net, where he chronicles his ceaseless pursuit of the best cookies and milk in America, and tweets at www.twitter.com/philgaimon. 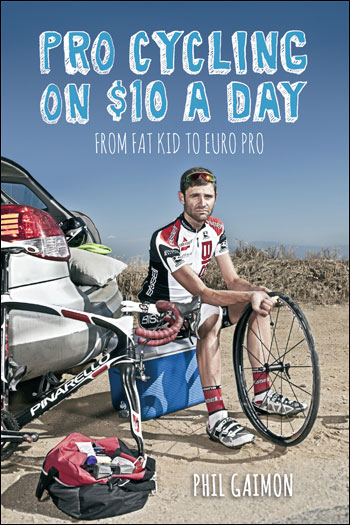