Feng Takes King of the Mountains Jersey in Korea

Champion System Pro Cycling Team’s Chun Kai Feng took the lead in the king of the mountains classification Monday at the Tour of Korea while moving into the top 10 overall.

Champion System Assistant Director Chris Wherry said the aim for Stage 2 was to take the mountains jersey, so having Feng move up in the overall made for an even more dynamic day.

“Kai’s fantastic ride not only gives us a jersey to fight for, but has brought us back into the general classification hunt,” Wherry said. “I’m really happy with him; his efforts have made the peloton respect his broad abilities.”

The 138.1-km stage had an aggressive start when Feng and nine other riders escaped less than 10 km into the race. Eventually a group of 11 more riders bridged up to form the race’s main break.

Feng – a former Taiwanese national road champion – took third over the first categorized climb and was the first to summit the race’s final climb.

“The KOM (king of the mountain) was the goal and I’m very happy to take the jersey,” Feng said.

The field never got organized and Feng’s group led by more than five minutes with 10 km remaining. Eric Young (Optum presented by Kelly Benefits Strategies) soloed to the victory out of the escape while Feng finished sixth, five seconds back. Kinglok Cheung (Team Hong Kong China), fourth on the stage, moved into the overall lead. Feng is Champion System’s best-placed rider in ninth, 3:17 behind.

“I hope to defend the jersey and move up in the general classification on Tuesday’s mountaintop finish,” Feng said. 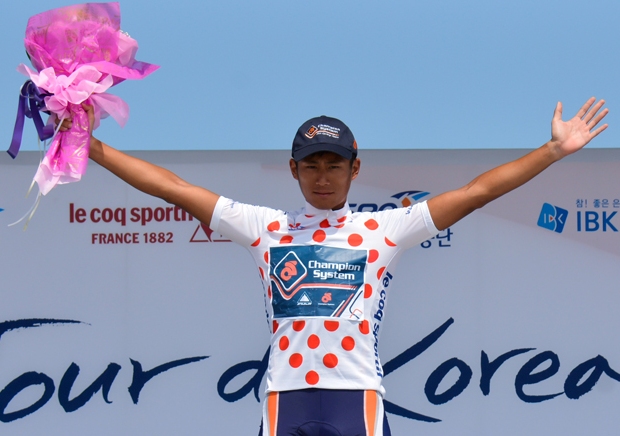