Fortified Bicycle Guarantees your Bike will Never be Stolen Again

Today, Fortified Bicycle launched Invincible, a bike uniquely designed to solve the specific problems that pain city-cyclists. In addition to featuring puncture-resistant tires and a rust-resistant chain and frame, Invincible comes backed by a pioneering Theft Protection Guarantee that replaces the bike and any of its individual components in the event of theft. 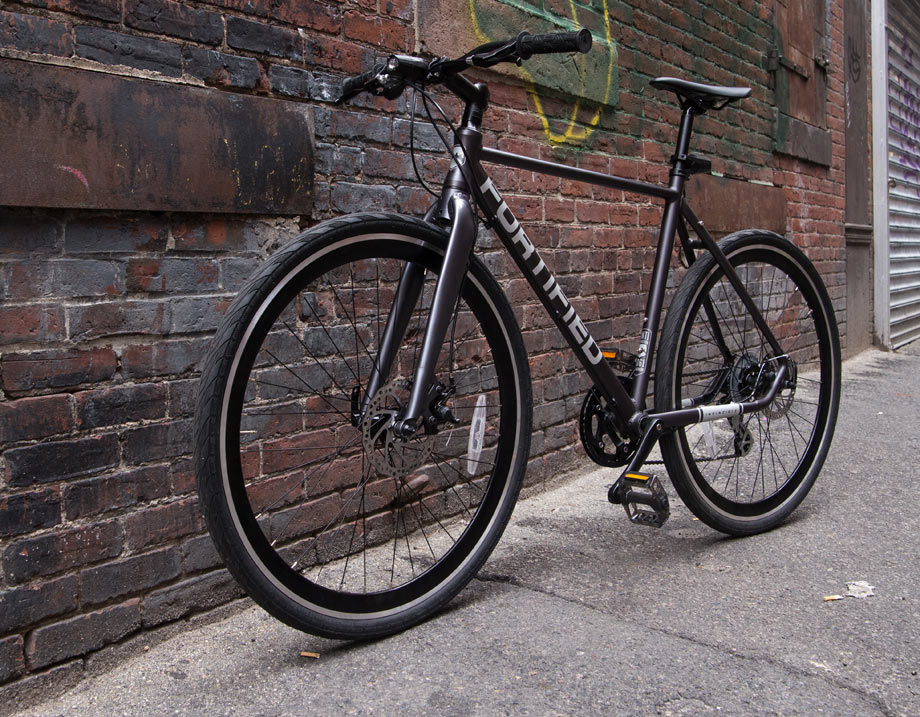 In order to eliminate the risk of theft, Fortified has built a team of Bike Security Experts whose sole responsibility is to keep Invincible safe at all times. The team approves new buyers, manages ownership, monitors secondary markets to identify stolen bicycles for sale, and – in the unlikely event that the bike is stolen – works with local law enforcement to recover the bike and apprehend the thieves.

“It’s no secret that most stolen goods are sold in online marketplaces like Craigslist or Ebay. So part of our solution is to keep our bikes out of secondary markets. By restricting secondary sales, we ensure that thieves no longer have an incentive to steal our bikes,” explained co-founder Tivan Amour.

“In reality, all of this happens behind the scenes. When you buy Invincible, you get a tough, simple U-lock that allows you to lock up anywhere around town without fear of theft.”

Should Invincible or any of its components be stolen, replacements will ship out within 24-hours.

When designing Invincible, co-founders Amour and Slava Menn interviewed over 350 city commuters. “It was crazy” said Menn. “Every one of them was riding a bike designed for anything but the city: road bikes, mountain bikes, ‘Craiglist beater bikes.’ Because these bikes weren’t designed to overcome thieves, weather damage or flat tires, they die in the city. We built Invincible to love the city.”

Fortified spent 14-months designing their bike that solves the biggest challenges facing city-cyclists. The result is Invincible, a “City-Proof” bike that is:

1.Theft-proof: Outfitted with Fortified’s proprietary anti-theft hardware, each of the bike’s
components – handlebars, seat, wheels and front and rear lights – are guaranteed
against theft. Most importantly if the bike, or any of its components, is ever stolen,
Fortified’s Protection Policy will ship replacements within 24-hours.

2. Rust-proof: Constructed with a 6061 Aluminum rust-proof frame and zinc-coated,
corrosion-resistant chain, Invincible is built to endure the harshest winter conditions.

3.Flat-proof: Equipped with puncture-resistant tires, Invincible is designed to float over
potholes and climb curbs.

In designing Invincible to serve as the ultimate urban bicycle, Fortified prioritized one focus over all else: eliminating theft. “51% of city cyclists have been victims of bike theft and, according to the FBI and National Bike Registry, $350M worth of bikes are stolen each year,” explained Amour. “We’re putting a stop to that.”

The single-speed version of the bicycle features Promax brakes, while the eight-speed offers Shimano Altus derailleurs and Tektra disc brakes. “Both versions have light-tread tires that are 700x32c: beefy enough to swallow curbs without the unnecessary knobbiness of mountain bike tires,” said Menn. “We found many experienced city cyclists use cyclocross bikes. Their disc brakes and beefier tires are ideal for foul-weather city-riding, but no one needs 27 speeds if they’re not racing, so the 8-speed was designed like a cyclocross bike with simpler maintenance.”

Both bikes, which are expected to ship by June or sooner, are currently available on Kickstarter. Bikes start as low as $149 upfront and less than $10 per month for Theft Protection coverage. More information on the Invincible bicycle, including the particular specifications of each model, can be found at invincible.fortifiedbike.com.

About Fortified Bicycle, Fortifiedbike.com
Fortified Bicycle has been creating bike gear for city-cyclists since 2012. Over the past four years, the company has successfully launched two versions of anti-theft bike lights and a seat-post security solution, partnered with over 300 bike shops around the country and served over fifteen thousand city-cyclists. The company strives to empower cyclists to ride with confidence everyday by arming them with a line of indestructible and anti-theft gear that’s specifically designed for their needs.
Follow Fortified Bicycle on Facebook (www.facebook.com/fortifiedbike) and Twitter (https://www.twitter.com/fortifiedbike).