-OVEREND VS TOMAC: A REMATCH FOR THE AGES?- 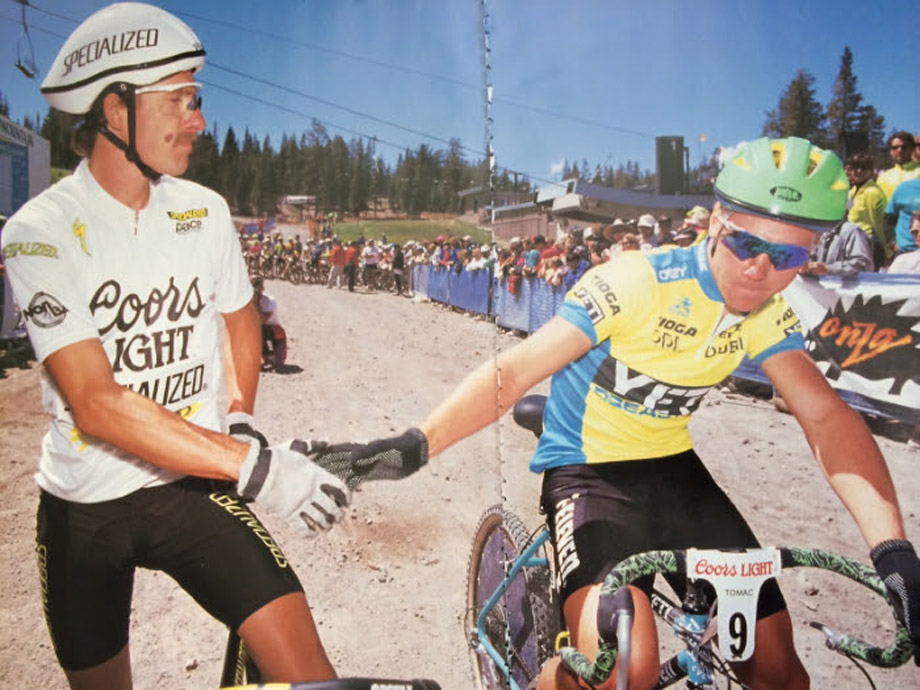 The roster of mountain bike racing champions slated to show at Todd and Ned’s Durango Dirt Fondo presented by Specialized is starting to resemble that of an early 90’s mountain bike race start list. Julie Furtado and John Tomac are just two of the sport’s legends coming to Durango on September 12 to celebrate the 25th anniversary of the first ever UCI World Mountain Bike Championships. The challenging 30 and 50-mile ride followed by an evening of celebration presents a rare opportunity to not only line up with some of sports accomplished riders but the chance to intermingle with them as well.

Devine and her former competitor’s were among the first to commit to the weekend festivities. “The 90’s gals have talked about getting together for years,” Devine said, “and we couldn’t think of a better venue to reminisce about the old days than Durango.”

“I’m really excited that this event is shaping up to be a reunion of arch rivals and good friends from the early days of mtn bike racing,” said Overend. “We’re going to have a great mix of legendary racers along with some of the fastest riders on the international race circuit today. The riders are coming for the opportunity to reminisce about the early days of racing while riding our great local trails. I think everyone is going to appreciate the great coffee shops, restaurants and brew pubs that were not here in 1990,” he added.

Other names from the 1990s and 2000s expected to partake in festivities include Overend’s former teammate Daryl Price; longtime TREK pro Travis Brown; former Team Schwinn rider and Fort Lewis College cycling coach Elke Brutsaert; and former 4x and DH National Champion Tara Llanes. Bridging the gap between the past and present is Wells’ Specialized XC World Cup teammate and rising star, 22 year-old Howard Grotts. Grotts has been challenging the biggest names in the sport this season and most recently defending his title at the Missoula Pro XCT.

To register for Todd and Ned’s Durango Dirt Fondo visit www.ToddandNedFondo.com. Each registration package includes an exclusive schwagg bag, a finisher’s trophy, post-race feed party and microbrews, and an invitation to the 25th Anniversary of the MTB Worlds party.

A portion of the event proceeds will benefit Ned and Todd’s favorite causes. Beneficiaries include Trails 2000, a local organization that builds and maintains trails and has been largely responsible for the growth of the trail systems; the Mercy Health Foundation, which supports Durango’s Mercy Regional Medical Center. Fort Lewis College will host an all-are-invited Sunday fundraiser breakfast to benefit NICA (National Interscholastic Cycling Association).

Michel Thétaz: “The IAM Cycling team worked to perfection together, and we are no longer the small Swiss”