As the Giro d’Italia reached Turin, Italy, the first Grand Tour of the season came to a close. For Team Giant-Alpecin it is a moment of reflection and a chance to offer insight into the team’s performance plans as it prepares for the season targets that lie ahead.

Team Giant-Alpecin experienced a dramatic preseason with the training accident in Calpe, Spain, eliminating six of its riders from racing for the first months. With Max Walscheid (GER) returning to action in the Baloise Belgium Tour last Wednesday, all riders involved have now returned to competition and the team is slowly coming back to full strength, leaving the most challenging period in the team’s history behind. However, there were also positive signs to report in the first part of the season, as the team saw its talented riders showing their potential for the future.

As the “Fight for Pink” kicked off in Apeldoorn, the Netherlands, the team saw four of its riders finishing in the top 15 on the opening stage, with Tom Dumoulin (NED) taking the victory on home soil. This ideal beginning was followed by a total of six days defending the maglia rosa, which unfortunately ended on stage 11 for Dumoulin. The Giro continued with strong rides from Nikias Arndt (GER) who twice came close to winning a stage and he finally took a fantastic victory on the closing stage, and from Georg Preidler (AUT), who finished third on the queen stage, one of three top-10 results in the Giro for him.

After returning from Italy, Dumoulin has recovered well. Team Giant-Alpecin trainer/coach Adriaan Helmantel (NED) explained: “Tom took a rest week at home and gradually restarted his training in the second part of last week. He will be able to further build up duration and intensity throughout this week.”

Looking ahead in preparation for the middle block of racing this season, Team Giant-Alpecin is using high-altitude training for the fourth consecutive year. The team’s French climber, Warren Barguil, who will be racing in the Tour de Suisse, is already in his second of three weeks at 2,300 meters’ altitude at the top of the Sierra Nevada mountains. He will be joined by Dumoulin later this week and Dutchman Albert Timmer shortly after.

“This year we are taking a slightly different approach in terms of planning in comparison to the last years,” Helmantel said. “With Warren we’ll focus on making sure he’s at his best in July, whereas with Tom we will focus on his second big season target, the time trial at the Rio Olympics in Brazil in August. Because he missed the first part of the season, the focus with John [Degenkolb] is more on racing in this period rather than joining the altitude camp as he did previous years. For him it is crucial at this stage to regain racing rhythm.

“During the altitude camp we work on the endurance base, which is crucial in building toward top form and to reach race finales as fresh as possible. With Tom we will focus on specific time trial efforts, which we did last year as well. This approach is science-based and, more important, built on experience.”

With regard to Dumoulin’s road to the Olympics, Helmantel said: “We designed our plan based on a closer analysis of Tom’s physiological output from the Giro. For now it looks ideal to combine specific training, selected rest periods and an altitude camp with the Dutch championships in June and the Tour de France in July. In terms of a physiological buildup we’ve identified this as the ideal calendar for Tom’s middle block of the season, which ends with Rio as a highlighted goal. We’ll keep monitoring at every step, and the analysis of his training sessions in June will be the crucial factor in assessing whether we can stick with this plan.” 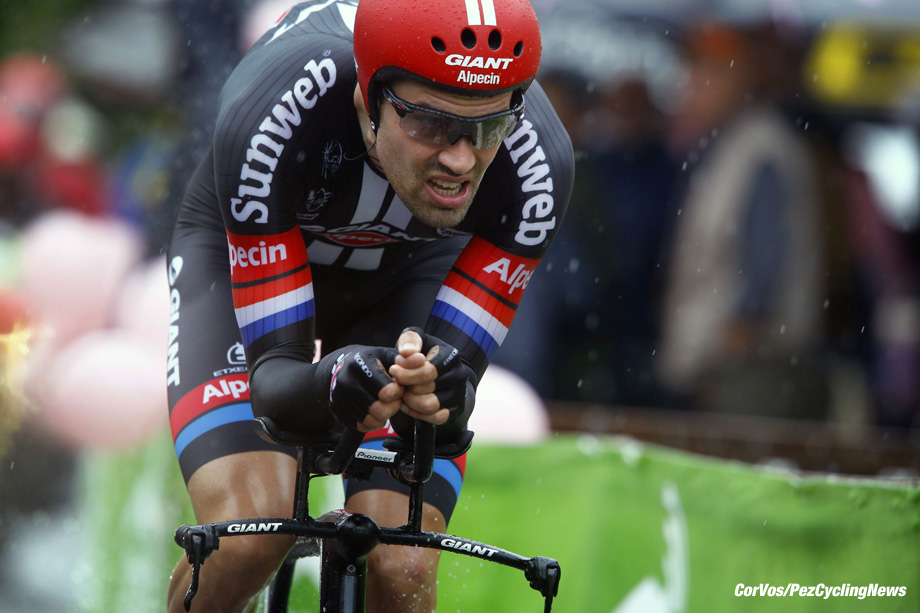 Gilbert to Rejoin the Peloton in Luxembourg