Announced today at the Veneto Region headquarters are the stages of the 2015 Giro d’Italia that will be raced in the Veneto region. The relationship between the Corsa Rosa and Veneto – the area famous for its champions and cycling aficionados – has been going strong for more than 100 years, since 1912: the year when Giovanni Micheletto won the first stage of the fourth edition of the Giro d’Italia, which ended in Padua. In the 2015 Giro there will be two stages raced entirely on Veneto soil, while another stage will end in Veneto – Vicenza – and one more will start from the region: Marostica. Starting from Sanremo and ending in Milano, like an ideal “Classicissima”, the three-week-long Corsa Rosa course will be the sporting embodiment of Italian society, culture, history and sport.

Thursday 21st May – Imola – Vicenza 190km (mountain finish)
This is a stage with two very different characteristics. The first 130km are perfectly flat, crossing the Pianura Padana to reach the Colli Euganei (Castelnuovo) and the Monti Berici. From here it’s up the Crosara climb from Mossano – 1500m long and with a gradient between 12 and 15% (max 18%) – and the Fimon-Perarolo climb will take the group towards the Monte Berico Sanctuary, at the top of the final climb which is slightly longer than 1km and with peak gradient of 10%.

Friday 22nd May – Montecchio Maggiore – Jesolo 153km (for sprinters)
This stage is perfectly suited to sprinters. It’s short, fast and entirely flat until the finale where a bunch sprint is almost assured.

Saturday 23rd May – Treviso – Valdobbiadene 59,2km (Individual Time Trial)
The time trial is divided clearly in two parts: the first 30km is entirely flat, whilst the second half – of almost the same length – is characterized by continuous technical climbs and descents. Some of them are demanding, and KOM classification points will be awarded for the first climb after Conegliano. This long and unusual time trial will test the riders’ energy management. 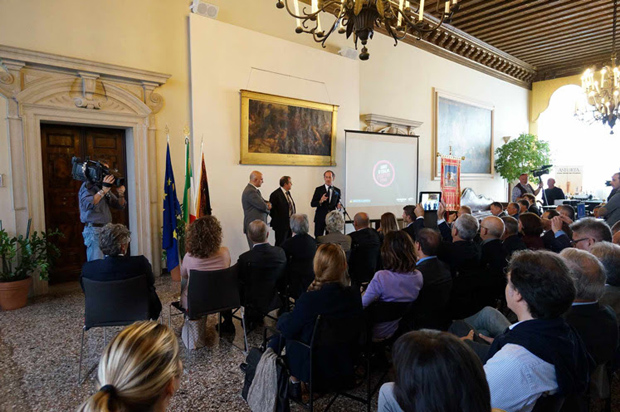 Sunday 24th May – Marostica – Madonna di Campiglio 165km (mountain finish)
Starting from the City of Chess, the first 50km of this stage is in Veneto territory, up until Lastebasse. It’s a mountain stage with a total of around 4000m of climbing, all in three ascents: the Fricca in the first part of the stage, then the Passo Daone (max gradient 14%) and the Madonna di Campiglio one after the other, in the second part.

Attending the presentation were the President of Veneto Region, Luca Zaia, the Giro d’Italia Director, Mauro Vegni and all the representatives of the stage committees. The event’s special guest was the Marostica-born two-time Giro stage winner (one in the 2014 Giro at Oropa Sanctuary), Enrico Battaglin. 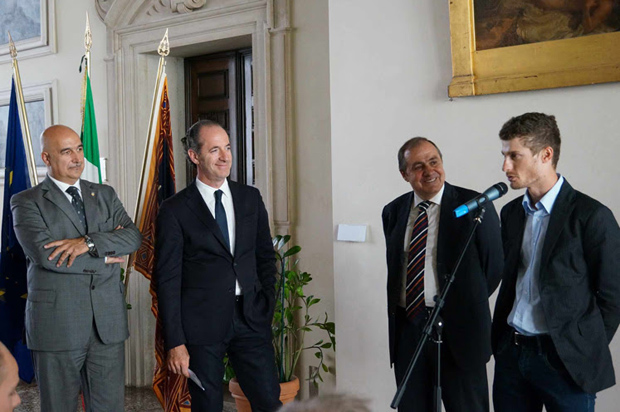 We welcome press releases and other news items that are of interest to our readers. Please send text or word files, and .jpg images for consideration to us at content@pezcyclingnews.com.