GFNY ITALIA on September 21 and GFNY COZUMEL-MEXICO on November 23 will be the first events of the newly-founded 2014 GFNY WORLD series.

“We have partnered with local event organizers who hold the same values as us, love the sport of cycling and their cities and want to bring together local and international cyclists to share the same experience of riding their roads,” explains Uli Fluhme, CEO of Gran Fondo New York Inc.

With GFNY Italia on September 21, 2014, Campagnolo Gran Fondo New York is coming full circle back to the motherland. The GFNY team has partnered with Largo Sole Eventi, an experienced granfondo organizer and tour operator in central Italy, to bring the New York flavor to a granfondo in Italy. The event will be headquartered in Terracina, a small coastal town one hour south of Rome’s Fiumicino International airport. Largo Sole CEO Nico Zoppo says: “GFNY Italia will be organized according to the quality standards of the best Italian granfondos. Participants will get a chance to ride from the sea to the mountains and back. During the week prior to the event, there will be organized excursions to historical and cultural sights as well as to local food and wine producers.”

GFNY Cozumel on November 23, 2014, is the first granfondo held in paradise. Cozumel is a tropical island in the Caribbean Sea off the eastern coast of Mexico. Cozumel is a destination for its beaches, scuba diving and snorkeling. “I did the inaugural Ironman Cozumel in 2009 and immediately fell in love with the island,” says Lidia Fluhme, President of Gran Fondo New York. “Cozumel’s warm climate, crystal clear sea water and friendly people make it the ideal early winter getaway. It’s an honor for us to host a GFNY event there.”

GFNY Cozumel CEO Shaun Gad: “I have been a racer for over ten years and have been following Campagnolo Gran Fondo New York since their first event. As a New York native, my heart has always been connected to NYC. I’m thrilled that we’re bringing the GFNY experience to Cozumel which has become a top destination for the world’s most ambitious as well as recreational athletes.”

GFNY WORLD plans to expand into countries that are particularly strongly represented at Campagnolo Gran Fondo New York, such as Brazil, UK, Canada and Sweden. Whether it’s new or already existing events, each are required to adhere to the standards of a true Gran Fondo: they must have road closures or police moderated intersections to allow riders the right of way, timing and rankings based on finish time.

About Gran Fondo New York
At the 4th annual Campagnolo Gran Fondo New York the world’s most international peloton with riders from over 70 countries and 48 US states will take on a challenging 100-mile route from NYC to Bear Mountain and back to compete against each other, the clock and themselves in a personal endurance challenge. The 50-mile GFNY BEAR on the same day is a non-competitive ride from NYC to Bear Mountain, to celebrate the park’s 100th anniversary. Gran Fondo racing stems from Italy, where these amateur cycling events take place nearly every weekend throughout Italy giving the cyclists a chance to test and prove themselves on two wheels. GFNY Italia on September 21 and GFNY Cozumel on November 23 bring NYC style to the world within the new GFNY WORLD series. Gran Fondo New York raises funds for Operation Smile, the international children’s medical charity. The official Grand Fondo New York website is: www.granfondony.com. 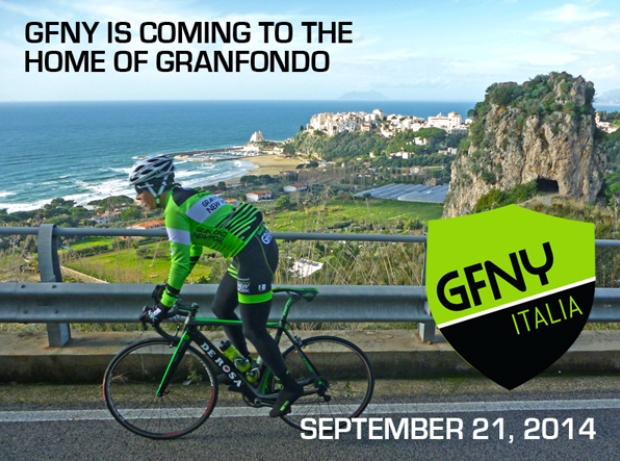