Granfondo Gimondi-Bianchi returns on May 4th

Granfondo Gimondi-Bianchi returns on May 4th

An “Azzurro” celebration ready to start in Bergamo

Red, like passion. Green, like Bergamo’s landscapes. Celeste, like the iconic color of Bianchi – title sponsor of the event. And “azzurro”, like the jersey Felice Gimondi led to the Rainbow triumph in Barcelona, 40 years ago. That’s all the colors of the 18th edition of the most popular Granfondo in Italy, the “Gimondi-Bianchi”, getting back on the stage in Bergamo on May 4th, after a one-year break. “Restarting was not easy – Felige Gimondi explained during today’s official presentation at the Credito Bergamasco headquarter – but we made it in spite of many inconveniences, and it was a top-class organization to make it possible.”

Beppe Manenti and the GM Sport staff had some hard work to do, even more than big competitions involving thousands of people usually require: a landslide forced the modification of two of three routes, but once again the organizers lived up to the task. “The biggest challenge – Manenti explained – was not to alter the difficulty degree, both in distance and altitude. And I believe we succeeded in doing that.”

The short route (km 89,4) was the only one to remain unchanged: the cancellation of Val Taleggio climb led to the modification of the further two, as it was replaced with the Dossena climb, making the medium route (km 126,2) slightly more severe than the original. In the long route (km 153,6) the loss of Costa Valle Imagna ascent was compensated with the shorter climbs to Bracca and Santuario di Cornabusa, making it just as demanding as before, but more lumpy and nervous.

Route variations apart, Granfondo Gimondi-Bianchi remains a great sample of top quality organization, even with tough tasks to handle: “In 2014 – Gimondi said – we will have the official gathering of the “Azzurri d’Italia” (Italy’s most notable past sports characters) in Bergamo on the same day, and some of them will also join us at the Granfondo.” Gimondi also donated to Azzurri d’Italia Association’s President Gianfranco Baraldi his “Maglia Azzurra”, the symbol of the 18th Granfondo Gimondi-Bianchi.

With Bianchi as title sponsor (“We are proud of this partnership, and we hope it is going to last for long,” Bianchi CEO Bob Ippolito said), Bergamo gets back to the core in an excellent year for sports in the area, like Province Assessor Alessandro Cottini and Town Assessor Danilo Minuti confirmed. Everything is set for a great comeback: get the party started. 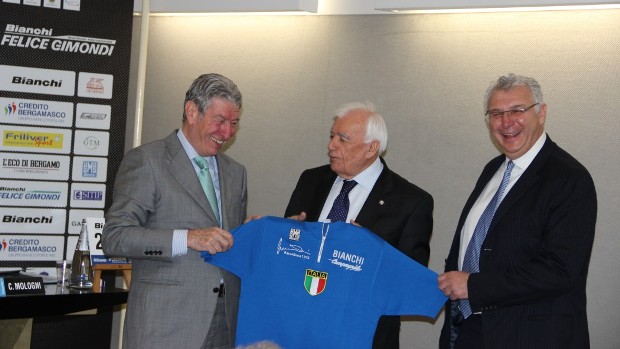 Niemiec and Anacona: test for the pink race