None other than two-time World Champion and Olympic Gold medallist Paolo Bettini will be lining up among all the fans at the starting line at Piazza Sant’Anna in Pomarance (Pisa-Toscana) on Sunday, April the 12th. Bettini would never dream of missing his gran fondo event, and he’s looking forward to being there for the official start but also to pedalling in the race. “I don’t want to be too optimistic but I think that this year, for the first time since I stopped racing, I’ll be coming to this event in pretty good shape,” says Bettini with a big smile. “All my usual friends and I have started riding bikes again fairly frequently. We don’t do it for the competition but rather because we just want to have some fun and spend time together, which among other things is also the spirit behind the Green Fondo.”

This year the Green Fondo Paolo Bettini-Vittoria-La Geotermia will acquire special influence by becoming a preview of the Giro d’Italia. In fact the routes on the granfondo have been completely updated by the organizational staff at ASD Velo Etruria Pomarance so that they retrace the same roads that the 2015 Pink Race will cover in the 6th stage, from Montecatini Terme to Castiglion della Pescaia, on Thursday, May 14th.

“With a little more than a month to go until the Giro, our event will be a Pink starter course,” explains Bettini. “The roads we are taking in the granfondo would have been one of those routes that I really like. It’s a nervous ride, up and down the hills, suited to breaks and attacks; anyway, it’s a stage for riders who just can’t stand staying at one pace. It’s too bad that as a pro rider I never got the chance to pass through here with the Giro. Different stages passed near my house, on the Aurelia Way on the Etruscan Coast, in the Chianti area, too, but it never made it here to the hills between Pomarance and Larderello. I’m glad that this year the Giro d’Italia will be leading us on a journey to discover these beautiful areas that are particularly adapted to bicycle fans.”

This year the Green Fondo Paolo Bettini will mark the milestone of its XVIII edition. “I am hoping that we will once again see a significant number of people lined up for the start. The organizers outdid themselves this year to do things big. We have enjoyed a relationship with the guys from ASD Velo Etruria Pomarance that has lasted almost 20 years. It’s an association based on friendship, esteem and collaboration,” says Paolo Bettini. “They have always been some of my most ardent supporters, and the spokespeople for this event mean a lot to me, too. We also have to thank the sponsors, without whom none of this would be possible. Among these special thanks go to Mapei and Sidi, two companies that have had a fundamental role in my career and to which I am bound by a deep friendship. And let’s not forget the commitment by Vittoria, which became the main sponsor of the event starting this year.”

“Getting back to the race,” continues Bettini, “beyond the competitiveness and rivalry which are naturally a part of it, as always the spirit of the Green Fondo will be to spend a nice day pursuing our common passion for cycling; to pedal, have a good time and after the race enjoy a lovely meal featuring local products in good company. In other words, our aim is to show people who come here the beauty and the hospitality of this territory, which is a true paradise for fans of cycling tourism. See you in Pomerance on Sunday, April 12th and might I suggest that you start training!” 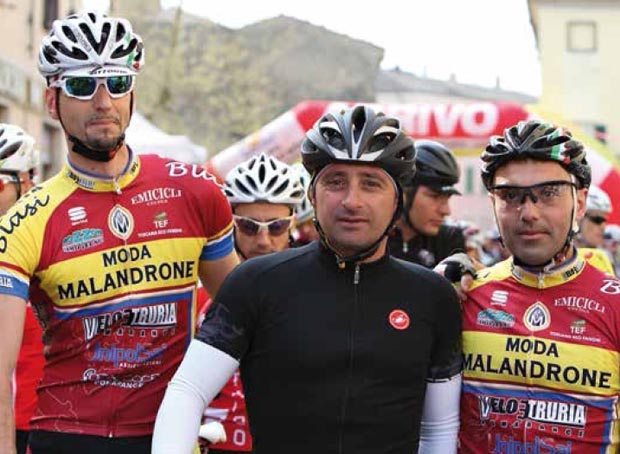 We welcome press releases and other news items that are of interest to our readers. Please send text or word files, and .jpg images for consideration to us at conte[email protected]

The Action Of Gent Wevelgem