On Sunday André Greipel won the unofficial World Championships for sprinters on the legendary Champs-Elysées and this for the second year in a row. It was the first stage win for the German this Tour, the second one for Lotto Soudal. The Gorilla has now won eight times this season. It’s for the sixth consecutive year that Greipel wins at least one Tour stage. Greipel won at least one stage in the eleven last Grand Tours he rode.

The final stage of the 103rd edition of the Tour de France was very predictable. The laps on the Champs-Elysées were covered in no time, some riders jumped away from the peloton, but in the end it was a bunch sprint. Lotto Soudal directed the last kilometres. In the home straight André Greipel was very strong. He beat Peter Sagan and Alexander Kristoff. The German champion finished off a wonderful team performance. Chris Froome became the overall winner of the Tour for the third time in his career.

André Greipel: “At last the sun is shining. The past weeks we did our utter best to achieve our goals, but unfortunately without success. If you win the final stage on the Champs-Elysées it was worth fighting for though. For sprinters this is the most beautiful place on earth to win. I have to thank everyone at Lotto Soudal for believing in me. The past years we achieved a lot together. I am proud of that. Without my team I wouldn’t have been able to set these kind of results for so many years.”

Lotto Soudal showed itself to the world the past three weeks. Thomas De Gendt was by far the best rider of the Belgian team, he was very active during the entire Tour. De Gendt won the twelfth stage on Mont Ventoux and he wore the polka dot jersey for six days. In the end he finished second in the KOM classification. The Belgian received the award for most combative rider twice and he is second in the election of most combative rider of the entire Tour. Until yesterday André Greipel hadn’t been able to win a stage this Tour, but this victory is a brilliant one. Marc Sergeant, manager of Lotto Soudal, is very pleased with the result.

Marc Sergeant: “The goals before this Tour were clear: try to win a stage with André Greipel and give some riders the freedom to show themselves. It took a long time before we achieved that first goal, but in the end we did and that’s all that matters. In Angers André lost with a tyre’s length against Cavendish, our Tour could have been very differently from then on. It’s true that it wasn’t always easy for Greipel in the sprint stages. He’s at his best when the sprint is well organized and if trains can be formed. At this Tour, the sprint stages were very hectic and it always took a lot of energy to position André as well as possible. Of course, Mark Cavendish was one of the main competitors beforehand. Although I had never thought he would be able to win four stages. The hectic sprints suit him really well, he’s able to position himself on his own.”

“The other aim was to win a stage with one of our attackers, that worked out well with Thomas De Gendt and he did it in an extraordinary way. In my opinion, Thomas obtained a stage win on one of the most prestigious finishes there are. He also rode in the spotlight during several stages by joining the breakaway and he managed to wear the polka dot jersey for six days. It’s true that Rafal Majka was the better climber but Thomas really gave his all. Until the very last day, he showed the world what he’s capable of. Therefore he obtained a really nice result in the classification of the most combative rider. He was second just after Peter Sagan. That’s a pity, but it isn’t a shame to finish behind a rider like Sagan. I think that you can compare these two riders, if you look at the will to attack. Thomas really showed himself during this Tour and he put Lotto Soudal in the spotlight.”

Thomas De Gendt: “I aimed for a stage win but I knew it wouldn’t be easy. There are a lot of riders who want to win a stage in the Tour de France. It’s a bit easier for the time trialists, punchers, sprinters or pure climbers to obtain a victory. For attackers like myself it’s rather difficult because you need to be 99 times in a break before you win a stage. But if you win on a mythical place like Mont Ventoux, it’s absolutely worth it of course. The team gives me the opportunity to join the breakaways but it’s hard to predict whether you’ll be part of it or not. I felt really good during this Tour. That was also the case last year, but then I crashed. This year I had some difficulties in the beginning of the final week but at the end I was still able to show myself a few times.”

“It was a real dream to wear the polka dot jersey in the Tour de France. I was able to wear that jersey for six days and it was an amazing feeling. Rafal Majka was really strong and on the crucial moments he was the better climber. Naturally, I’d preferred to wear the polka dot jersey till Paris but Majka was simply the best. It’s obvious if you take a look at the difference in the classification. It’s difficult for me to win the mountains classification with the current point system anyway. Also in the classification of the most combative rider I finished second, here it was Peter Sagan who was first. I really gave my all to win this prize so I’m a bit disappointed of course, but Sagan deserved this win. He’s a very aggressive rider and he always wants to race. He attacks at unexpected moments and he can finish off an effort. He’s a true blessing for cycling. Also in this classification I was beaten by a better rider so it’s easier to deal with that. I’m very happy about my efforts of the past three weeks and I finished at the 40th place on GC and seventh in the points classification while I didn’t aim to gain points on every occasion. This result shows that I was in great shape.” 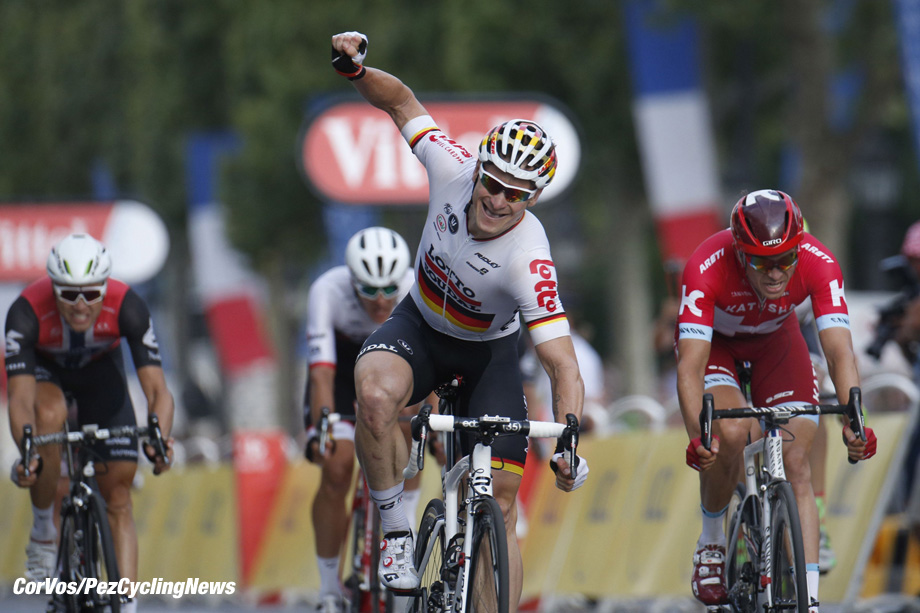