The two riders form part of the team’s young rider development program. Hanselmann earned her first breakout victory this season by winning the first stage of the Ladies Tour of Norway.

21-year-old Koppenburg is in her second season with the team, is a strong climber and time trialist and is seen as one of the future stars in the peloton.

“The reasons for me staying with the team are quite simple: amazing team atmosphere, great equipment and constantly improving our performance,” Koppenburg said.

“Maybe we don’t look like the biggest team on the start list but we race with heart and team spirit which is how we won many races. With every race we’re getting stronger and with the new girls for next year we will rock for sure.”

Hanselmann echoed Koppenburg’s sentiments: “This team is working with me for a long time and it always supports me. I extended the contract because the team shows me a clear way into the future and we’re very motivated for next year.”

Team Manager, Thomas Campana
Clara and Nicole are proof of talent scouting and development of Cervélo Bigla Pro Cycling. Clara comes from an athletic background and Nicole comes through the Swiss national racing program. They have already proved this year that they are on a very high international level. We continue our trust in them and invest in athletes like these with are becoming the backbone of the team.

They don’t just have the talent for winning but they have the daily mentality of the team which is to improve every day. This is why we sign athletes at a young age to work with them long term. They have both signed a two-year contract extension which means by 2018 they will be with us for four years. This is important to have a united group with the same philosophy as the team.

Nicole’s victory in Ladies Tour of Norway is just the cherry on the top. What you don’t see the rest of the time is two loyal riders accepting a working and supporting role. They’re hungry to get results but they accept working roles without any comments and that’s the quality of their professionalism. They know that sooner rather than later they will get their own opportunities but they are completely selfless and deliver whatever the team needs. This is why we’re excited to continuing with them into the future.

Nicole Hanselmann wins stage 1 of the Ladies Tour of Norway after attacking on the finishing circuit of the race. 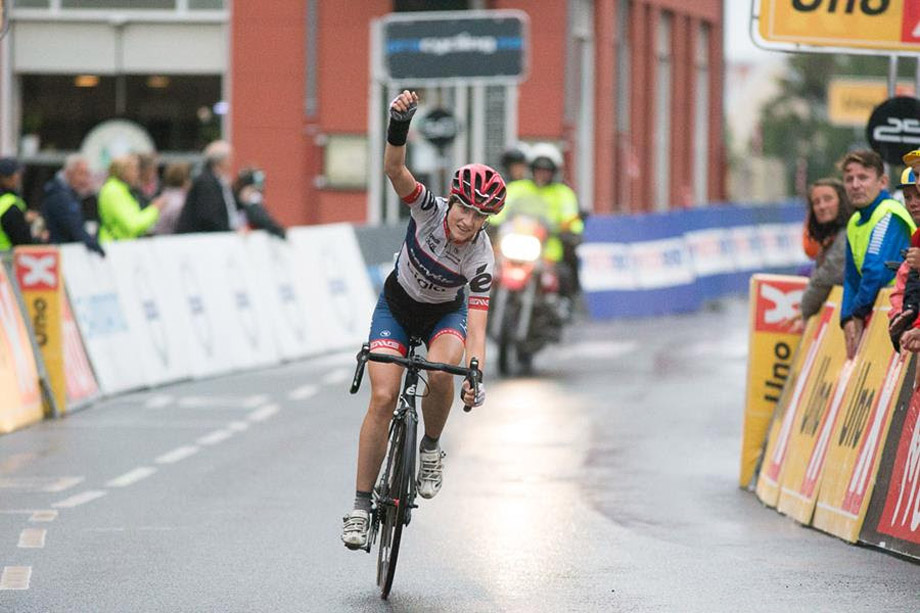