Horner: Anti-Doping Testers in the Wrong

The management of RADIOSHACK LEOPARD TREK wants to clarify the situation about the alleged missed out of competition anti-doping test of Chris Horner.

Chris Horner updated his whereabouts with USADA before the start of the final stage, giving the agency the name of his hotel for the night, phone number and room number for his one hour window between 6 and 7 AM. This is all according to the rules and Chris Horner received a confirmation email. A screenshot of the emails is included with this press release.
The anti-doping inspectors from the Spanish Anti-doping Agency that were asked to do the test by the United States Anti-Doping Agency (USADA) showed up at the wrong hotel in Madrid, where the team was staying but Horner was obviously not to be found.

The team believes the communication between the Spanish Anti-doping Agency and the media is a violation of the privacy of Chris Horner, especially since it comes down to a clear mistake by the tester.

The team asks the media to report correctly on this matter and will seek compensation for this matter with the responsible anti-doping agencies.

Here is the email: 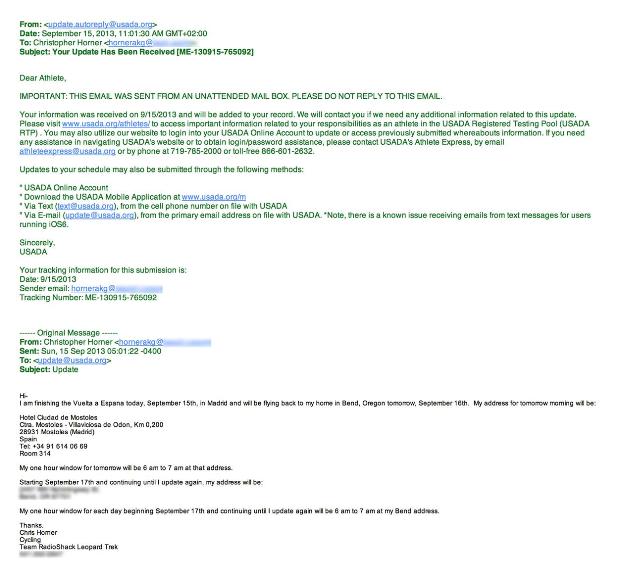 Vuelta Lowdown: The Wrapup and Those Power Numbers