Hucker replaces injured Palmer at Santos Tour Down Under

Injury to Tom Palmer sees Robbie Hucker make his UCI WorldTour debut at the Santos Tour Down Under for Drapac Professional Cycling next week.

The 23-year-old from Bendigo earned his place in the seven-man line-up courtesy of his form in the team’s pre-season training camp in Bright, and also the Cycling Australia Road National Championships. Palmer was sidelined for the Road Nationals due to a bulging disk and is receiving treatment.

Hucker was philosophical about his rise to the top echelon of the sport.

“It’s never good to get a start in a team with something like Tom’s back injury but I think I’ve put myself in the form and given myself the best chance to make that team,” he explained. “I deserve that spot and I’m ready to step forward with the chance I’ve been given.”

Hucker’s appearance at the Adelaide event represents a remarkable turnaround for the former Australian Under-23 Cross Country Mountain Bike Champion, who one year ago, stood on the side of the road as a spectator at the Santos Tour Down Under. There, what struck him most were the crowds and the quality within the peloton.

“To be going back there racing is pretty surreal,” he admitted. “I’m looking to make the most of the opportunity and do the jersey proud.”

In 2013, Hucker’s first full season as a road cyclist netted an impressive list of results including podiums at Baw Baw, Battle on the Border and Tour of Tasmania. He was 10th overall at the Tour of Japan, second on GC at the Tour of Tasmania and finished in fourth place at the gruelling Melbourne to Warrnambool.

Hucker paid tribute to the work done alongside coach Tim Decker over the last 15 months for the opportunity now ahead of him, specifically with the sense of professionalism and dedication now instilled.

“Tim gets the best out of a lot of people,” Hucker said. “He’s got a lot of champion athletes and it’s a credit to him as to where I’m at.”

“We’ll lift that extra bit and for sure, we won’t just sit in the peloton we’re going there to race as much as possible,” he said. 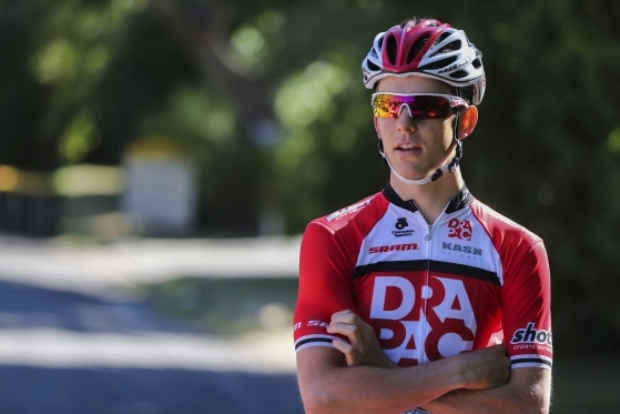 Robbie Hucker is ready for the Santos Tour Down Under.