The 34-year-old came out on top after a frantic and spectacular race, in which Quick-Step Floors were prominent from the start.
In 2013, Iljo Keisse rode to a solo win in Omloop Mandel-Leie-Schelde, at that time just a kermesse; four years later, the experienced Belgian repeated that victory and he did it in spectacular fashion, netting Quick-Step Floors’ 45th win of the season in the race which this year has been upgraded to 1.1 status.

The 72nd edition of the event was crazy fast from kilometer zero, which didn’t come as a surprise, considering it took place over a circuit in Meulebeke, where the riders had to cover 14 laps for a total of 179.2 kilometers. Quick-Step Floors launched several moves, constantly shaping out the race and sending riders in the breakaway – among them also Fernando Gaviria, who was making his return to competition after eleven weeks.

With 50 kilometers remaining, the Colombian’s group was brought back by the pack, but soon a new group emerged, stagiaire Przemyslaw Kasperkiewicz and Iljo Keisse finding themselves there from our team. The 23-year-old Pole – a Klein Constantia alumni – did some long stints at the front of the 16-man move, riding his heart out in support of Iljo and making sure the chasers will be kept at bay.

On the last lap, the advantage of the attackers came down, but thanks to Kasperkiewicz’s mammoth effort, the front group sticked and Iljo Keisse outsprinted Huub Duijn (Verandas Willems-Crelan) and Maarten Wynants (LottoNL-Jumbo), for his first victory of the season.

“We came here with only six riders, but we were aggressive from the start, because we knew it would be difficult to control the race on this circuit. We had at least one rider in every breakaway the whole day, and with about 40 kilometers to go the decisive one got away; luckily, I was there with our stagiaire Kasper, together with 14 other guys. We immediately got a gap of one minute, which reached 1:50, and when we entered the last lap, we still had 60 seconds in hand, so it was never really big, but enough to stay away.”

The 34-year-old, who recently extended his contract with Quick-Step Floors until 2019, was happy to taste victory again after two years, and at the same time, full of praise for his Polish teammate: “I rode really hard at the front, but this outcome wouldn’t have been possible without Kasper’s help. He gave everything on the road and did an amazing job in bringing me in a good position in the last kilometers. There was only one guy in between in the end, and then, on the final meters, I just had to open my sprint and overtake him. I’m not a sprinter, but today I could sprint quite easily thanks to the perfect job of Kasper. I’m happy to take the victory here, it’s a nice feeling to be again on the top spot of the podium!” 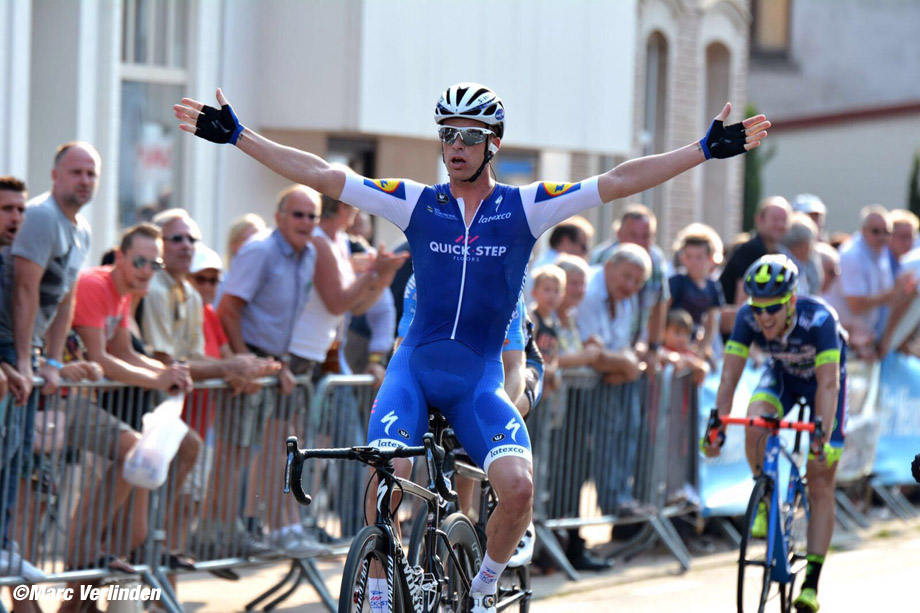