In His Own Words: Leigh Howard Previews Tour de Pologne

The Tour de Pologne will have an unusual start this year as its first two stages race through the Dolomite area of Trentino, Italy before heading to Poland. Most likely the overall contenders will have already risen to the top of the standings before the race even reaches Poland. Then, after just two days of racing, the peloton will have a rest day, although technically a travel day, before taking on the next six days.

In last year’s Tour de Pologne, fast man Aidis Kruopis earned a victory on stage four in a bunch sprint into Katowice. Kruopis is back in the hopes of a repeat victory this year as part of a six-man team. Alongside him will be Leigh Howard who is making his return to racing after an unfortunate fall in stage six of the Giro d’Italia sent him home with a broken collarbone.

In his own words, Howard tells us about his recovery and the Tour of Pologne.

After I crashed, I had ten days off the bike. I went back to Australia and caught up with family. It was a slow build over a couple of weeks after that. For the last five weeks, I have been home in Andorra doing some really hard training in the mountains. I also went to Belgium and did some kermesse racing there. I won one, and Mitch [Docker] was third in another. He’s coming on good as well.

For me, racing again after three months will be a shock to the system. I’m fit after the training I’ve done, but I need racing in my legs.

In Poland we will be chasing a few objectives. We’re going in with a bit of a mixed team but a good team. We have Pieter Weening who can have a crack at the overall. Although we’re not sending a team solely to support Pieter, if he gets in the jersey or is in a good position, we’ll help him out there. We have Durbo [Luke Durbridge] for the time trial on the last day. In the sprints, either Aidis or I can have a crack.

It’s a strange tour this year. First, we’ll be starting in Italy where we have two stages and then travel to Poland as a rest day. Usually rest days are saved for Grand Tours. To have a rest day after the weekend is unusual.

The race is also introducing time bonuses, quite large time bonuses, for the intermediate sprints. I don’t think it will change the outcome of the race because the GC will mostly be decided in the first two days of the tour in the big mountain days. A few time bonuses here and there aren’t going to make a difference to the final outcome.

Another new introduction is a six-man team instead of eight. If they implement a six-man team full time for WorldTour races, WorldTour teams will have to figure out how to share races among 30 guys on a roster. It could make things really interesting. I think the idea is to make the races more engaging or exciting, but I don’t think this will change the outcome much.

Regardless of some of the unusual features of Tour de Pologne this year, our goals remain clear. To walk away thinking the week was a success, we’d like to see a few things happen. Overall, if Pieter can achieve a top five or ten that would be big. If he carries the form he had at the start of the year, a top five is possible. Picking up a stage win or a couple podium places will be important for Aidis and me. Durbo will have a crack at getting on the podium at the time trial. Poland is his first race back since the Giro, but he’s been training hard in Andorra. 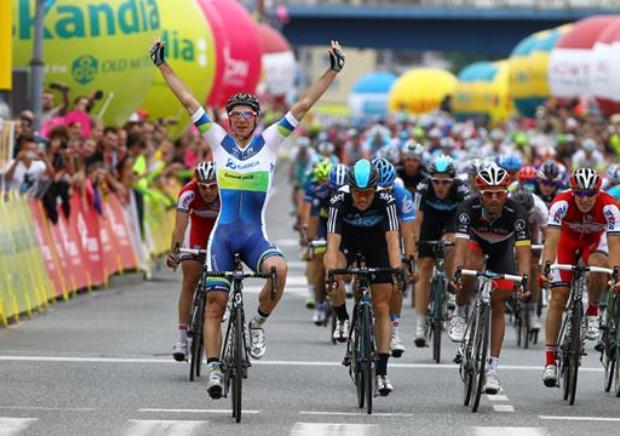