Israel’s first Professional Cycling team will take on its most challenging quest since the team was founded just 2 years ago. After an exciting Base Period, including two training camps- one in Israel and one in Spain, Israel Cycling Academy team will begin it’s inaugural Pro Continental season tomorrow.

The historic moment will take place in Alicante, Spain where the teams incredibly young, and hungry, 8 man squad, will kick off the 2017 season with a 38 km TTT- the opening stage of the 5-stage Tour Volta a La Comunitat Valenciana – VCV.

“Are we ready? I think We are”, said head Sport Director Kjell Carlström. Carlström joined the team as part of a sweeping makeover this off-season to prepare the team for the rigors of the Pro Conti level. Previous to taking the Head position with Cycling Adacemy, Carlström has experience as Director Sportif with Iam Cycling and Team Sky, and has confidence in the teams preparations for this exciting moment.

Said Carlström: “I know we have some riders that haven’t been racing on this level yet, but I am not worried. They have trained well and are motivated…It will be a tough race with a lot of great teams and riders, so our expectations are more of doing our very best and see were we stand. Of course, we are all hoping to win a stage …as long as we are racing the way we want to race, there is always a chance”.

The 8 riders for Israel Cycling Academy are extremely motivated, as they embark on the Israel-based team’s maiden race as a Pro-Continental team. Australian Zak Dempster will be the leader of the squad for the Volta a La Comunitat Valenciana. A veteran Pro, having raced and finished the Grande Tours, Dempster is looking forward to stepping into the leadership role. Said Zak: “I am definitely feeling ready to race. It was a good, long build for all of us, the only thing missing is to actually get out there and do it…My self and others (on Cycling Academy) might have a crack at a few of the punchy finishes in this tour”. Fellow Pro Tour Veteran Dennis Van Winden strongly agreed with Dempster’s assessment of the team stating, “We are a team that can go for the surprise”.

Israel Cycling Academy is sending a strong squad to Valenciana, showing they are serious, and ready to go head-to-head with the Pro Tour teams, and to see where they stand. Their roster include an Israeli, National Time Trial Champion Aviv Yechezkel, which is a big statement of the teams commitment to continuing to develop Israeli riders to race at the top professional levels.

Israel Cycling Academy was founded in December 2014 in Jerusalem, as Israel’s first Professional cycling team, with a clear vision to help Israeli Cycling and bring young cyclists, especially Israelis, to the top levels of cycling.

The team recorded wins in races over 4 continents in the last 20 months, and is backed by sponsors like Cannondale, Lazer, Hertz Israel, and Verge, as well as the Israeli-Canadian philanthropist Sylvan Adams- Israel Cycling Academy is now set to go Pro Continental for the 2017 season. 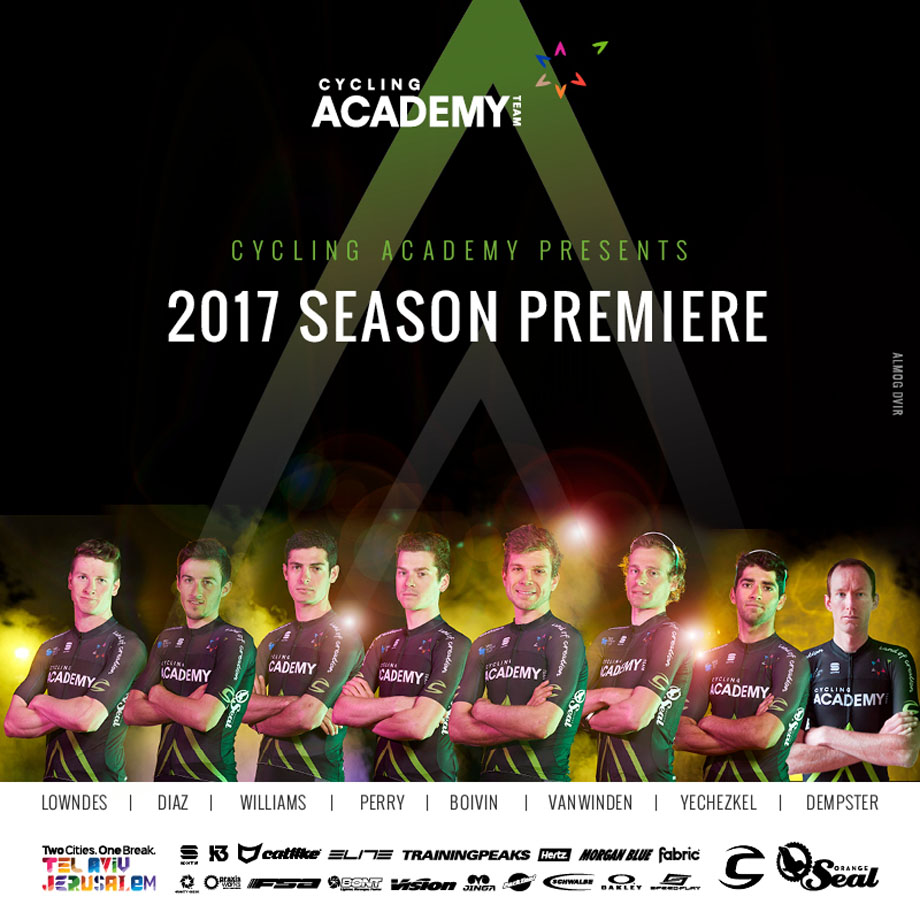