It was another early start for our riders at the South African Championships. With defending champion Louis Meintjes at the start line the pressure was on MTN-Qhubeka p/b Samsung. And the team lived up to it. At the end Jacques Janse van Rensburg soloed to an impressive victory in Mbombela.

MTN-Qhubeka p/b Samsung was flying its flag right from the beginning. Jacques was quick enough to make the move and go with the first break of the day. The group of six went clear after just a few kilometers of racing and built up a solid lead of 6 minutes.

The break featured other strong riders such as Bradley Potgieter (Europcar SA), David Maree (Abantu), and Christopher Jennings (Bonitas) and the peloton seemed happy with them being up the road. Nevertheless, the heat was on and resulted in a crash, in which Louis was involved. He came back to peloton later, when a mechanical struck Reinardt Janse van Rensburg. Jay Thomson selflessly handed him his bike, and helped Reinardt to keep his chances for the final.

With 65 kilometers to go the gap came down to 5 minutes, and Jacques started attacking his breakaway companions. 25 kilometers before the finish he dropped his last rivals. Behind him the peloton also began to split. Reinardt and Louis kept an eye on pre-race favorite and South African TT champion Daryl Impey.

After 4:26:36 hours Jacques crossed the line, a consolidating 2 minutes ahead of Dylan Girdlestone (Drapac) and Impey. Reinardt and Louis finished fourth respectively eighth. Our U23 riders rounded out the strong performance taking a full podium in their category.

Jacques Janse van Rensburg – Rider
I was looking forward to this race for the past couple of months and prepared well, so I’m really happy with this win. To be able to come home solo and take the jersey is very exciting. I also have to thank my teammates who did a really good job in the peloton. Knowing this kept me motivated in the final. It’s good to keep the title in the team.

Douglas Ryder – Team Principal
For our team MTN-Qhubeka p/b Samsung the National Championships are really important. To win this race and keep the title was a major goal for us. We had the plan to put Jacques in the break. He managed to go with the first attack and rode a fantastic race, attacking twice in the final before winning solo. Back in the peloton we were also riding strong to assure Jacques to stay clear. I’m very impressed by how the team and our U23 squad rode today. 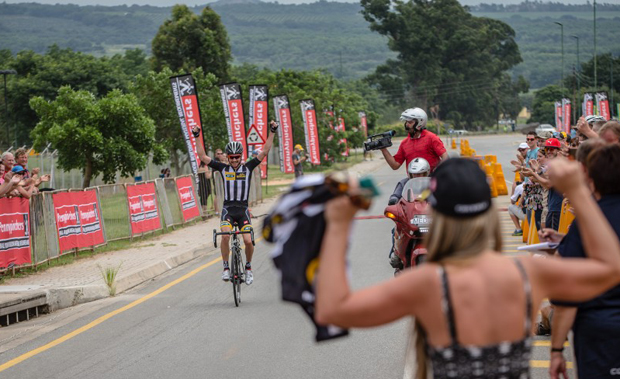