Janse van Rensburg Does it Again on Vuelta Stage 3

It was another scorching hot day here in Spain as tempratures hit 40°C during the 3rd Vuelta a Espana stage. Michael Matthews (Orica Greenedge) would reign supreme on the tough final 2km climb to the line. The Aussie out sprinted Dan Martin (Garmin Sharp) and Joaquim Rodriguez (Katusha) for the win. Team MTN-Qhubeka p/b Samsung had Sergio Pardilla come in 18th position.

As in yesterdays stage, Jacques Janse van Rensburg was again the star of the show, getting into the break on consecutive days. Janse van Rensburg was joined by 4 other riders today in Lluis Mas (Caja Rural), Danilo Wyss (BMC), Jerome Cousin (Europcar) and Jonathan Fumeaux (IAM Cycling). Initially the 5 riders were able to build up a lead of 8 minutes before Greenedge sent its chargers to the front.

The gap dropped suddenly to 3’30″ after a rapid chase led by the Aussie team. Mas took off on his own and pushed his lead out by a further minute over the final 40km’s as Janse van Rensburg and his remaining escapees rolled through until swallowed by the bunch. Mas would not last out in the heat on his own and would be reeled in with 20 odd kilometers to go.

The heat was a big talking point today with team staff having to develop some serious cooling strategies to keep the riders from overheating. Team MTN-Qhubeka seemed to do a fair job as the protected rider, Sergio Pardilla was able to reach the finish fresh enough to stay with all the big contenders. Kristian Sbaragli also did a good ride by rivaling the punchy riders on the final climb to finish with the front runners.

Rider – Jacques Janse van Rensburg
Yeah it was another good day with me getting into the break. I wasn’t able to win anything as the other riders were just too fast in the sprint for me but we got some good exposure for the team and for MTN i think. It was really hot out there but i was coping well with it at least. Ill definately take it wasy the next few days now and then see how i can support Sergio on stage 6. 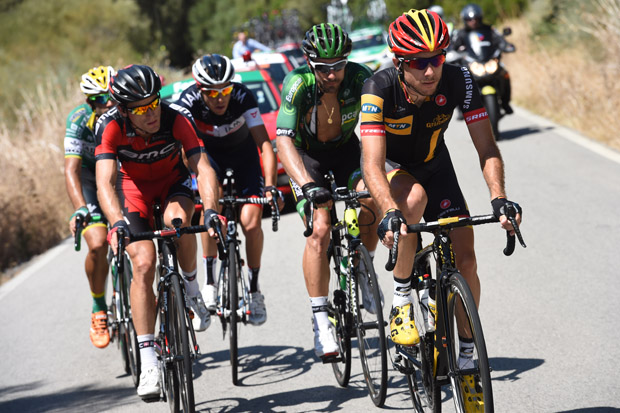