JLT Condor to launch in 2015 and collaborate with Mavic for apparel and equipment.

Following two successful seasons with John Herety’s team, international insurance brokers, JLT, will continue in its role as title sponsor of what will be known from January 1st as Team JLT Condor.

The team, which is the highest UCI ranked British Continental squad, boasting wins on five continents as well as multiple national titles, will also continue its partnership with Condor Cycles of London, who have been sponsoring top-level British professionals for over 60 years.

The two headline sponsors will also be joined by a new partner – French clothing and accessories manufacturer Mavic, who will supply the team with apparel, helmets and footwear.

Team manager John Herety commented:
“We will be targeting both the domestic calendar, which is gradually strengthening year-on-year, as well as international stage races, like the Tour of Normandy and the Tour of Korea, where we have enjoyed success in the past.”

“We have retained double Olympic champion Ed Clancy, and former National Road Race Champion Kristian House, along with a core group of riders that we have been developing for years. I expect that as our riders continue to progress next year we will see even more impressive results.”

“Everyone is excited to be moving forward into a new era. We have great support from JLT, Condor and Mavic. This team has a strong record of bringing in sponsors, like JLT, from outside of the cycling industry, and I consider that a reflection of the level of professionalism that we have in the team.”

Charlie Pearch, a senior partner at JLT, commented:
“JLT is delighted to continue its support of the UK’s leading domestic cycling team in partnership with Condor, who are an iconic part of British cycling’s heritage. We are also thrilled that Mavic, a company with a hugely respected reputation in the industry and with connections to the highest echelons of the sport, has chosen our sponsored team as a clothing and equipment partner. It speaks volumes for the reputation of the team.”

Mavic celebrated its 125th anniversary this year and for the French company the move to partner with an established team is an important one.

“We are happy that Team JLT Condor gives its whole trust to the Mavic Head-to-Toe helmet-apparel-footwear range for the coming year”, said François-Xavier Blanc, Global Head of the Brand. “We have chosen to partner with JLT Condor for 2015 and 2016 season because of their innovative approach to being accessible by cycling fans.”

“The new partnership will allow Mavic to develop further our striking new technologies designed to improve performance both by reducing aerodynamic drag and helping the athletes to perform in all weather conditions.”

Grant Young, managing director of Condor Cycles, reiterated his support for young, talented British riders and the domestic racing scene – things that have been part of the Condor brand’s key values since the company’s inception in 1948.

“This team is a great foundation for young riders to gain experience on an international stage and it is great that Condor is able to continue to contribute to British cycle sport.”

“The team will remain a testing and proving ground for our new technologies and bicycle models. Our Super Acciaio and new Leggero SL models are direct results of rider-based research.”

Team race kit and the team bicycle will be unveiled on 2nd January at the team’s first race in Australia.

For more information on the team, race program and supporting sponsors, go to the team’s website www.teamJLTCondor.com

The team’s social media links will remain as @RaphaCondorJLT until 1st January. The team will continue to update news about its riders on the usual social media channels. 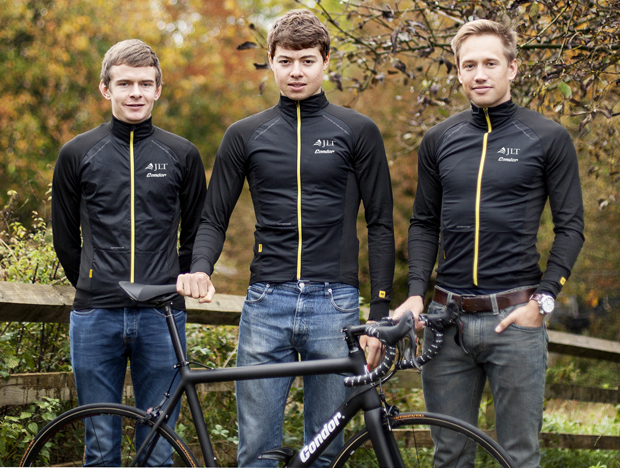