Swedish champion Emma Johansson has taken out the inaugural BeNe Ladies Tour, finishing second on the final road stage in the Netherlands today.

Going into the second and final day of the Tour in third position, Johansson set up her victory this morning, winning the 9.6km individual time trial to move into first overall ahead of this afternoon’s final road stage.

Despite suffering a heavy crash early in the last stage, the 30-year-old held her composure and delivered in the final sprint.

“I am just very pleased with that,” Johansson said.

“The girls have been working really well today and I’m very happy to bring home the victory for the team, I think we deserve that now.

“And it makes up for the wounds.

“I went down quite early in the race and it’s really sore.

“I haven’t crashed for three years, knock on wood, so it’s bit shocking to do it when I haven’t been on the ground for a long time.”

In a race that was always going to come down to seconds, especially those earned as bonuses, Johansson knew what was a stake.

“I just knew coming into the last stage Jolien was really strong and fast at the moment and I wasn’t feeling super fresh,” Johansson said.

“On the first intermediate sprint, she won and I was third so she gained two seconds on me.

“I knew coming into the last sprint if she was going to win I had to be second and I just managed to hold onto her wheel to take second place on the stage.”

Earlier in the day, the national time trial champion stopped the clock at 12minutes 22.88seconds in the 9.6km time trial, over four seconds quicker than her closest competitors in Vera Koedooder (Mix2, 12:27.01) and Brianna Walle (OPW, 12:27.65).

“Normally if a time trial comes after two or three stages of a Tour I am really strong because I can ride just as strong. But if everyone comes in fresh I can’t always ride as fast,” Johansson said.

“I didn’t know if yesterday’s stage was going to be enough to make the other girls tired so I wasn’t super confident. I was confident that I could do a good race but how good it was going to be against the others, that you never know.”

Sport director Gene Bates praised the team for an impressive all-round performance, particularly after some bad luck on the final stage.

“It was probably one of the most stressful races I have done this year,” Bates said.

“Nothing went our way to begin with this afternoon, Emma actually punctured, then was hit from behind in a crash and broke her shoe.

“Twice we had to get her back on and the team did a fantastic job in looking after her and making sure she got back on straight away.

“We also lost Loes (Gunnewijk). That was a big worry for us because she plays a really important role for us in the team and on the road. She is the most experienced rider we have and she does a great job pulling it all together.

“But the other girls did a tremendous job from that point onwards and we walked away with second on the stage and the overall win, so full credit to the whole team today.” 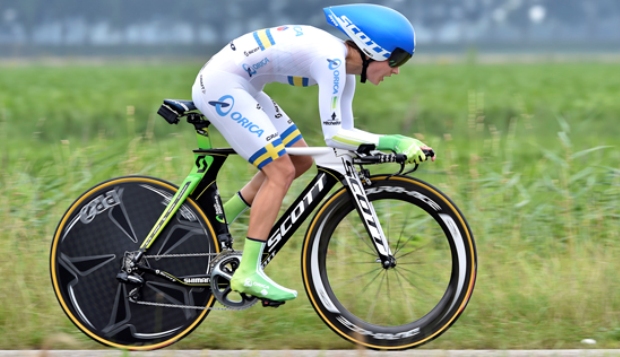 1-2 for Handley and Cuming at the Ryedale GP