After making his come back to professional cycling this year with Team MTN-Qhubeka p/b Samsung, John-Lee Augustyn has announced his retirement with immediate effect.

John-Lee underwent a successful Birmingham Hip Resurfacing procedure of his left hip in 2011 to repair damage caused by avascular necrosis of the femoral head following a crash in the 2007 Tour of Portugal. After the operation John-Lee proceeded with a thorough rehabilitation program with the goal of returning to his pro-cycling career.

During 2013 John-Lee expressed an interest in joining Team MTN-Qhubeka. Given his African origins, grand tour experience and performance record, the team was keen to bring him onboard. After a comprehensive medical assessment by our team doctor Dr Jon Patricios and consultant specialists, management were given the green light and John-Lee signed for the 2014 season.

His 2014 race program started with La Tropicale Amissa Bongo in January, followed by the South African National Championships and Le Tour de Langkawi. He raced well until the 230km Stage 7 of Langkawi during which he developed disabling right knee pain, which forced him to abandon. He was immediately assessed by the team’s on-site doctor, Dr Jarrad Van Zuydam, and on return to Italy consulted with sports medicine specialists. The knee pain was determined as secondary to biomechanical instability from progressive fatigue and weakness of the muscles controlling and supporting the left hip joint. Rest and rehabilitation exercises were prescribed, and his bike fit was adjusted to a less aggressive, more upright position. Unfortunately, despite medical intervention and 2-months of recovery and rehabilitation, John-Lee has not been able to return to the training and race load expected of a professional cyclist. After extensive consultation with our medical team and his personal medical doctors, John-Lee has taken the decision to retire from his professional cycling career.

John-Lee Augustyn
I have had a hard time over the last few years in my cycling career suffering with on-going injuries. I decided to take an indefinite break for about a year and I then started riding again and the bug bit really bad to get back to racing. I think it’s in every Pro cyclist to race and we get used to it, it’s a strange but addictive life style.
Team MTN-Qhubeka p/b Samsung has given me an opportunity to get back to racing with the best in the world, I was super motivated to get back to the top again and obviously this takes a lot of sacrifices along with a lot of hard work.

I slowly got back into the rhythm of racing, I still have the experience of racing in the bunch and up at the front but I can feel that I am not the same anymore. It’s only something a Pro rider can feel and understand.
To be honest I have really been struggling to get back into it again especially with a hip resurfacing, it is not easy. I can train for hours and hours, my leg feels like a normal leg but as soon as I start to race hard up at the front on the Pro level I just struggle and keep on injuring myself, particularly in the cold conditions. This mentally can break you, I have learnt to pick myself back up many times but after 6 years of struggling it becomes hard.
I have a family to support and I am ready now to sadly move on and build a more stable future. I still have a big passion for cycling and I will continue to stay in the cycling world and support this beautiful sport. I will definitely continue to ride my bike on and off road.

I really have to thank all the people that have played a big role in my cycling career, always motivating me, for getting me back into shape, helping me through the tears and pain and in the times I didn’t want to listen. Without them I would not have gotten to where I am. These people know who they are, there are simply too many to mention.

A special thank you to Douglas Ryder and MTN though for giving me the chance to race on this amazing team, they gave me all the support I needed. Thanks also to Dr Jeroen Swart my personal coach for all the years that he has mentored and continued to support me all the way through my difficult path, his knowledge is beyond this world and then also to Robert Hunter, for all his advice and never stop believing spirit. I could not have asked for better people to support me.

Douglas Ryder
We were happy to give John-Lee the opportunity in Team MTN-Qhubeka powered by Samsung. There are not many South African riders that have ridden all 3 Grand Tours and have the experience John-Lee has. In the short time he has been on the team he has helped the riders adapt in the racing and given them plenty of good advice. John-Lee really wanted to be able to race at the highest levels of the sport again and we hoped the same for him. I hope to see him back in cycling in the future in a role where he can continue to add value like he has. 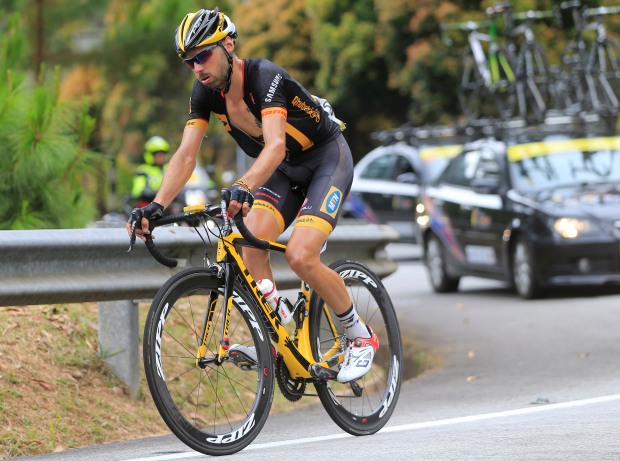