“It’s nice that I’ve never lost a national TT title,” commented Bob Jungels, 20, who always raced as a youth rider with the cycling club of Dippach. “I had no information on the other competitors but I was able to catch some riders ahead of me and I saw my average so I knew my time was very fast. It wasn’t easy; in fact it was a pretty tough race. There were two laps of 11k with a 5k false flat and the rest a series of small climbs and one serious climb. You could never recover. I am really happy with this jersey. It’s always an honor.”

Jungels has been hailed the past few years as an emerging young talent in cycling. His successes in his neo-pro year included a solo win in the GP Nobili last earlier this year, as well as Sunday’s stage 4 victory in the Tour of Luxembourg. Past victories include winning the silver medal at the 2009 Juniors European Time Trial Championships, and then the gold at the Juniors World Time Trial Championship the following year. Prior to turning professional, he won the 2012 Paris-Roubaix U23, overall in Flèche du Sud, the Luxembourg national U23 time trial championships and a stage in the Giro della Valle d’Aosta.

Jungels will participate in the road race on Sunday and then take a break before lining up in the Tour de Wallonie (July 20-24). 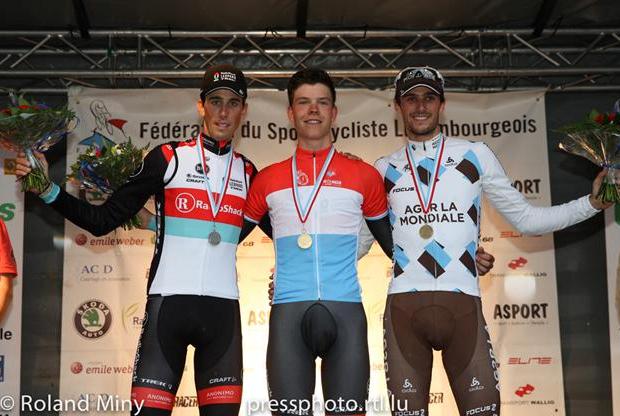