Tomorrow it’s the 79th edition of Gent-Wevelgem. The WorldTour race introduces something new this year, the so-called plugstreets. The Kemmelberg remains an important part of the course, the riders have to cover it twice.

The race of 249.2 kilometres starts in Deinze, from where the peloton heads towards Veurne. Then the bunch rides along the French border towards the first hill of the day: the Catsberg. Via the Kokereelberg and Vert Mont the route leads to the Zwarte Berg, which has to be covered twice in a row. Then the route goes over Ravensberg and Banenberg to the bottom of the Kemmelberg. When the riders have arrived there it is still 75 kilometres till the finish. The Kemmelberg is immediately followed by the Monteberg. Then it’s time for the plugstreets. Plugstreet is the name the Britons gave to Ploegsteert. The peloton will ride over three of these plugstreets or gravel roads, a total distance of 5.7 kilometres. Those plugstreets take the riders along the Christmas Truce Monument in Ploegsteert. After the plugstreets the riders head to Baneberg and Kemmelberg. From the top of the Kemmel 34.2 kilometres are left to go.

Jens Debusschere is one of the riders in the Lotto Soudal line-up tomorrow. Two years ago, he finished fifth in his home region. The past two editions, Jürgen Roelandts finished seventh. In 2015 he had rode solo in front for a long time in an unforgettable stormy edition. What are his expectations for tomorrow?

“The past years, I set some good results in Gent-Wevelgem. I did always compete for top ten, but never got on the podium. Tomorrow is a new chance and as always I will aim for the victory. Winning a Classic remains the goal.”

“No doubt, it will be a tough race tomorrow. Gent-Wevelgem is not a sprint Classic anymore. Also this edition, the wind will be a determining factor early in the race. We can expect echelons in the Moeren. That is what makes Gent-Wevelgem so attractive. Also the plugstreets could cause some spectacle. If echelons are created on those narrow roads, only a few riders can be in it. Otherwise the plugstreets won’t influence the race.”

“The second ascent of the Kemmelberg will have a big influence on the result. For 99% of the riders it is important to attack before Peter Sagan does. I am not alone and can look for some companions.” 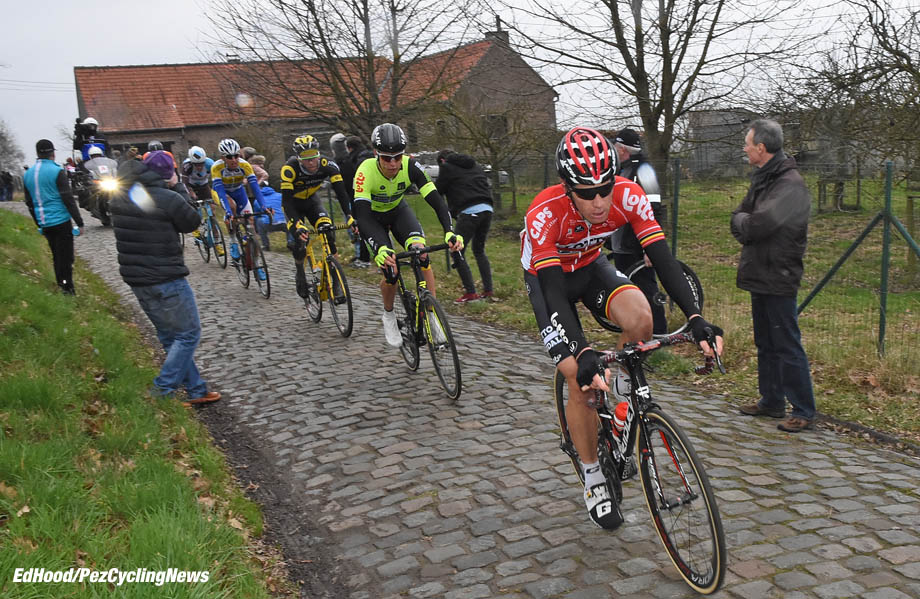