Just one week to go at GF Gimondi

Just one week to go at GF Gimondi. Growing expectation toward May 4th.

In one-week time, Granfondo Gimondi-Bianchi gets back on the stage on Sunday, May 4th, after a one-year break, joined to official meeting of Azzurri d’Italia (May 3rd-4th) – with Italy’s most notable former Italian sports characters. The city of Bergamo gets ready for an outstanding weekend with plenty of joy and excitement in the air.

An inviting atmosphere awaits the riders who will compete on Bergamo roads, tied at cycling legend Felice Gimondi as a key-figure of Italian cycling history. An exciting day to spend looking either at the performance and the fascinating landscapes, fully enjoyable for participants and accompanying persons.

In the last few weeks, a landslide forced the modification of two of three routes: the short route (km 89,4) was the only one to remain unchanged, while the cancellation of Val Taleggio climb led to the modification of the further two. It was replaced with the Dossena climb, in the medium route (km 126,2), while, in the long route (km 153,6), the loss of Costa Valle Imagna ascent was compensated with the shorter climbs to Bracca and Santuario di Cornabusa.

Meantime, at Bergamo’s headquarter, Giuseppe Manenti and his organizational staff speed up preparation in view of the race. Today, around 50 persons handled the race packs and numbers to be delivered in the event’s eve on Saturday May 3rd.

With just one week to go, 18th Granfondo Gimondi – Bianchi’s registrations are still in progress meantime, and can be filled through the online application by credit card on official website www.felicegimondi.it, otherwise by bank transfer, postal bulletin or directly to the organization headquarter in Bergamo (Via G. Da Campione, 24/c). 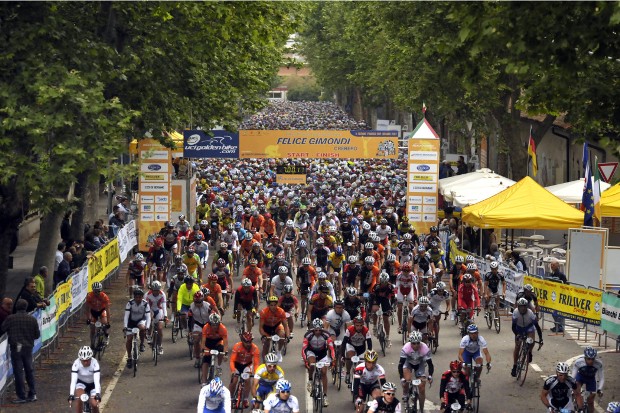