Jordan Kerby has won the opening medal of the 2014 Cycling Australia Road National Championships with a powerhouse ride to victory in the Men’s Under-23 Individual Time Trial on Wednesday. The event was also the first for Drapac Pro Cycling’s new season as a Professional Continental outfit.

Kerby averaged 398 watts for the ride and was driven to succeed.

“We have so many good riders and amazing support staff – it’s like one big family so it’s a great relief to pull out a result for them when they’ve put so much faith into me,” he said. “Everything went perfect today and when everything goes well you have the best opportunity to pull out a big one.”

It was the perfect start for Drapac’s 2014 Road Nationals campaign with Directeur Sportif saying: “One from one, it doesn’t get any better.”

Kerby, reigning national Under-23 Road Champion, was the penultimate rider out of the start house with only 2013 Chrono Champenois Champion Campbell Flakemore to follow. Setting the new fastest time at the halfway mark, Kerby was averaging 52km/hr on the 28km course.

“I was looking at the favourites out on the road and I knew I was up on all of them. I thought ‘this is really going to be good’ but I had a lot of chest pain after the halfway mark. It wasn’t my legs that were giving out today, it was my breathing so I just had to fight it.”

Drapac Pro Cycling’s Performance Director Keith Flory continued to motivate Kerby over the radio for the final run into the finish, something Vogels believed made sure of the gold medal.

“He only hit the brakes the once so he could get around the roundabout so it was a very character-building ride from him,” Vogels explained. “He rode very quickly on the way out and he was doing some big watts.

“I always knew it was going to be tough for him on the way home but he just dug in; Keith was talking to him over the radio, telling him he was riding well, giving him some tips and pointers and then in the last 10km, got quite vocal with him. I think that was probably the difference.”

“This year I came in with the right preparation and support and I knew that I could win so it’s a great feeling,” he said. “It’s great to win the time trial too because I consider myself to be more of a time trialist so it confirms that reputation.”

Kerby will now aim to defend his road title on Saturday and Vogels is optimistic for another strong performance.

“Looking on form, there’s going to be some state federations there with some strong boys but it’s going to give him confidence for the road race that he’s in great condition,” he said. “I know he’s content but he probably won’t be satisfied until after the road race.”

“It’s probably going to put a bit more of a target on my back but Buninyong is such an unrelenting course that it’s going to come down to who had the strongest legs on the day,” he admitted. “Hopefully I’m in that front group when it matters.” 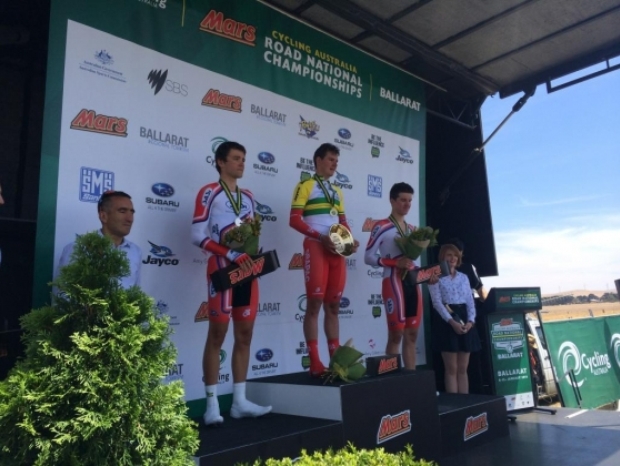