Kirsten Wild has sprinted to her second Ronde van Gelderland win in as many years today for Team Giant-Shimano, her eighth win of the season.

She once again proved strongest at the end of a tough attacking race which saw the peloton split leaving just 19 riders in front. In this group were Lucy Garner, Willeke Knol and Kirsten.

Lucy and Willeke then rode to keep the group together for a sprint and buried themselves for Kirsten. As she has showed in many a bunch sprint already this season, Kirsten proved fastest to take victory.

“It was hard work out there today but the girls did a great job in keeping things together for me,” said Kirsten after the race.

“The first hour was really hard and the race split a bit here already but after that when we hit the crosswinds it broke up completely.

“We had five riders in the front group at first then three. The attacking started with 25km to go and Lucy and Willeke rode hard to control and cover these. Then I got away in a few moves towards the end but it came back together before the final few kilometres.

“I knew I was strong and rode on the front into the finish. In the sprint I gave it everything and it’s great to get another win.

“It’s really promising that the younger riders are racing so well and are showing what they are capable of in their development.”

Team Giant-Shimano coach, Ruud Verhagen said: “Kirsten was really strong today and with the others providing strong support she was in a good position.

“Lucy and Willeke really gave everything out there today and the win is a nice reward for their and the rest of the team’s work on the road.

“The team is in a really good flow at the moment and the women are communicating and riding well together. This is benefitting the younger riders and will help them in their development, learning off the older, more experienced ones. We can see already that this is paying off.” 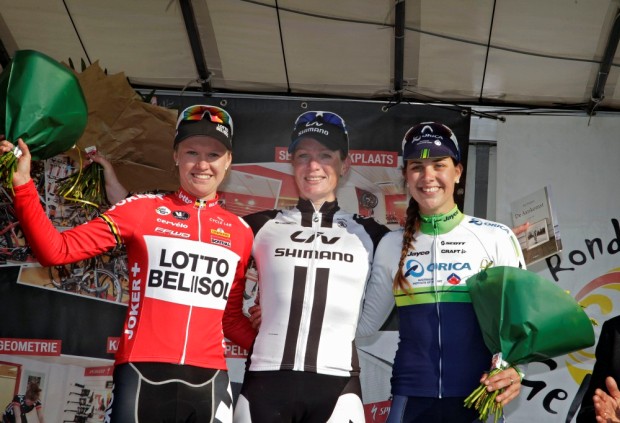