Klemme Claims the Win in China

Daniel Klemme took the win in the opening stage of the Tour of China 2, completing a job well done by the entire team. Piero Baffi, who perfectly lead out Klemme, took fourth. “I’m so happy I can return the trust I had from the team with a win.”

“The 125 km circuit race around Changsha was really fast, with a lot of attacks”, says Daniel Klemme, who’s enjoying his usual late-season form. “I’m very, very happy with this win – which is certainly the biggest in my career. The team worked so well for me today. I was in the wheel of Piero for the whole last two kilometers. With 150 to go I could sprint from his wheel and take the win. I’m so happy I can gice something back to the team after all the work and trust they gave me.”

Klemme, a 22 years old sprinter from Germany, says it was a hard sprint, however: “It was a slight uphill finish. There was full head wind and it was raining. On top of it, the peloton is really nervous. There’s a lot of media, so there’s certainly some stress. We’re hoping to defend the leader jersey for some more time. Tomorrow should be a similar stage, so we hope to repeat!”

The Tour of China 2, which follows the Tour of China 1, has another five stages on the menu. Because the race travels all over China and has more rest days than allowed in one stage race, the organizers split up their race in two chapters.

Team manager Adriano Baffi: “The team is really riding well. In Tour of China 1 we were definitely the strongest team in the race, but we dropped the ball in the final stage. Let’s see what we are capable of in part two!” 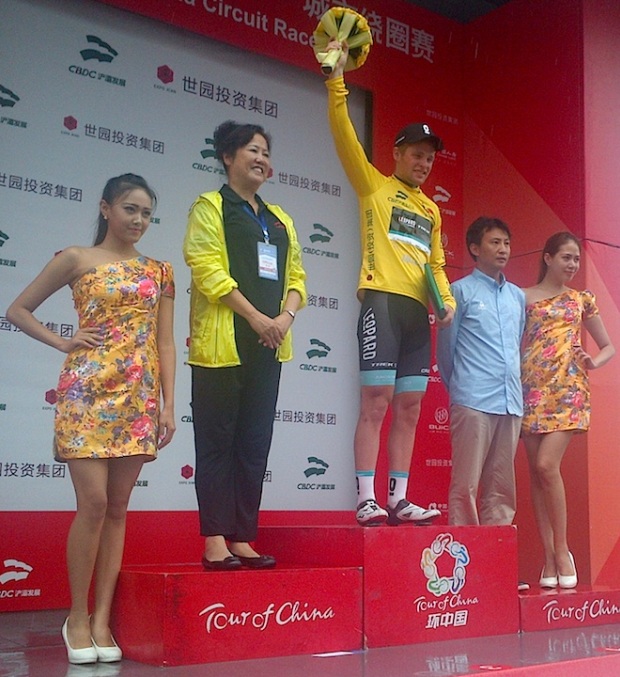