Marianne Vos: “Entering the history of our sport”

Currently unbeatable in Italy on the route of a Giro Rosa that she is dominating head and shoulders above the other competitors (she leads the general ranking after four stage victories out of seven), Marianne Vos has gone from strength to strength since her win in the Women’s Tour in May. After a visit to the Tour de France (to attend La Course press conference) and a few days’ rest in mid-July, she will begin some specific speed and sprint training as part of her preparation for La Course by le Tour. With just over two weeks to go before the event, the three-time world champion indicates her intentions and refers to the excitement in the women’s peloton leading up to the start of La Course.

Everything seems to indicate a sprint
As the season progresses, the peloton’s ambitions start to become clear and the number of candidates for victory on the Champs-Elysées is increasing all the time. As Marianne Vos notices, “all the teams are focused on this important race. Some teams want a bunch sprint, others will try to avoid it. Therefore, the main sprinters will be the favourites.” She says that most of the riders in the peloton are expecting an “aggressive” race as a result of the event’s importance and the tremendous media exposure it will receive.

Ferrand-Prévot as a lead-out?
The Rabobank Liv Women team, which is dominating the women’s Pro Tour season, marked La Course by le Tour in its diary several months ago. While all the riders will dream of winning the title, the important thing is that the team should come first on July 27th. For Marianne Vos, it does not matter who raises her arms high on the Champs-Elysées, only that she should be wearing orange! “With the team we will have open tactics, with all riders having an opportunity to break away and win the race. If it comes to a sprint, normally I’m the one our team RaboLiv will make a lead out train for.”

Team-mate and friend of the rising star of women’s cycling – the French rider Pauline-Ferrand-Prévot –, Marianne Vos hopes that the combination of the two can lead them to victory again, as has happened several times this season. “Pauline is in great shape. It’s great to have her in the team, both for her quality as a rider and for her personality. It will be fantastic for her to race in the national jersey on the Champs-Elysées. Pauline can play an important role in our sprint preparation.” 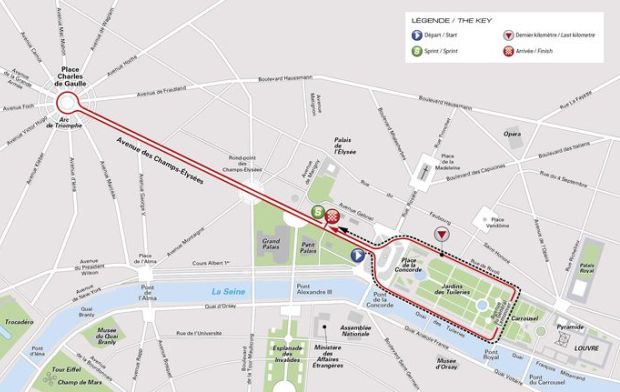 Entering the pantheon of the Champs-Elysées
For many of the entrants, La Course by le Tour has already become a major objective. “La Course is all the talk in the peloton. Every rider hopes to be on the roster for their team and wants to be part of this historic event.” While Vos’s place in the Rabobank team is sure, there will be an awful lot of competition in the 19 other teams that will line up on the Champs-Elysées to fight it out on the world’s most beautiful avenue.

Aware of the amazing media opportunity La Course represents for women’s cycling, Vos thinks the event will become a milestone. “The winner of this race will go into the history books. Of course I’d love to win, but it’s already a dream come true to race with the women on the Champs-Elysées on the final day of the Tour de France.”

Now that the men’s peloton has kicked off the show, the clock is ticking down to the great rendezvous of women’s cycling with the Tour de France. Keep your eyes out for an amazing finish in 15 days’ time!