Lampre-Merida back on the hat trick place

In 2013 the whole podium of Gp Costa degli Etruschi was colored in blue-fuchsia-green, thanks to the hat trick that was realized by Scarponi, Ulissi and Pozzato.

This year, the Tuscan race is scheduled in a period of the season that finds the riders in their early approaches to the competitiveness (Sunday 2 February).
Despite many of its cyclists will be in search of improvements of their fit, Team LAMPRE-MERIDA will try to hit the target in its Italian debut, thanks to Matteo Bono, Mattia Cattaneo, Luca Dodi, Kristijan Durasek, Manuele Mori, Jan Polanc and Luca Wackermann.

On the team car (Mitsubishi) there will be Bruno Vicino.

“For most of the team’s riders this will be the seasonal debut, so their target will be the improvement of their condition – Vicino explained – Bono, Wackermann and Mori came back from Australia during this week: their condition is already good and, on a demanding course as Gp Costa degli Etruschi’s one, especially Mori and Wackermann could aim to a good result”. 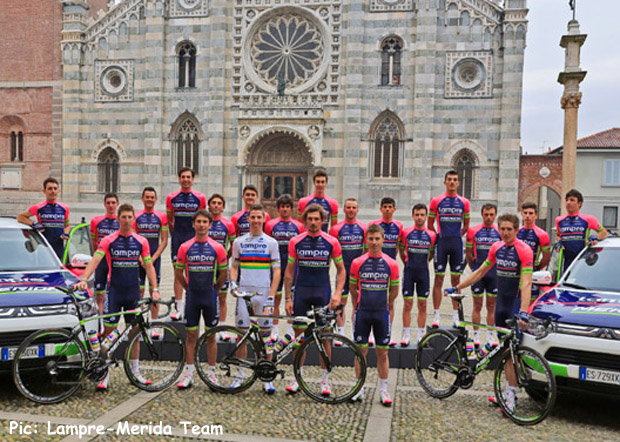 Area Zero Pro Team to Wear Rosti During their Races