LAMPRE-MERIDA flies to Argentina for the debut of its stars

The team, that will be directed by Orlando Maini, is characterized by two spirits: the Italian one, represented by Cunego, Modolo and Pozzato, and the South American one, with Anacona, Richeze and Serpa.

These six cyclists offer interesting inputs: Cunego is starting a season during which he’ll go in search for the competitiveness; Pozzato’s going to approach the first step of a path that will bring him to the classic races; Modolo is willing to repeat the amazing performances of 2013, when he preceded Cavendish in the second stage; Anacona would like to start in a good way the season that could brings him to a top level in the group of climbers; Richeze would like to hit immediately the target that he missed many times in the past season; Serpa hopes to receive good feedbacks after having spent the winter pause training in Colombia.

“It’s time to start the season: I’m happy and well motivated – Cunego said – It’s the first time I begin to race so early, but I evaluated with the team that it could be a good choice.

The debut in Argentina will be useful to check how I trained during the winter, without being harassed by the search of the result”

Pozzato will join the team coming directly from the USA: “I trained in the past weeks in California, on mixed courses and exploiting perfect weather conditions. I’m satified about the work I’ve done and I’m excited to start the season. I did not expect to perform exploits in Argentina, but of course I’ll offer my contribution to honor the race”.

Sacha Modolo will try to repeat 2013 performance: “In 2013 I obtained an extraordinary victory, preceding Mark Canvendish in the second stage. I took a look at the courses and I noticed that the stages will be a little bit more tough that in the past season, so the support by the team will be even more important. I’d want to give the team and the sponsors a joy”

LAMPRE-MERIDA is going to land in Argentina for Tour de San Luis (20-26 January, details at www.toursanluis.com/etapas). 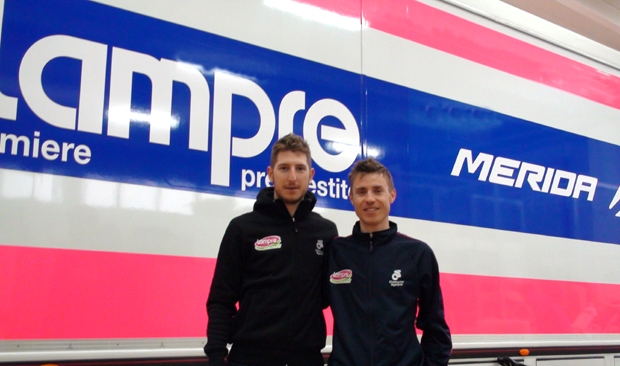 In photo, Modolo and Cunego before the start from Italy.