LAMPRE-MERIDA is analyzing the new course of Classicissima

LAMPRE-MERIDA is moving up for in view of the first top appointment of the next season, the first classic or, better, the Classicissima.

On Wednesday, during the meeting of the technical staff, team manager and the main blue-fuchsia-green cyclists, Milano-Sanremo was in fact one of the discussed topics.

The race, that is scheduled on March the 17th, will be characterized by an innovation: the Pompeiana climb, 5 km rise and 6 km downhill between Cipressa and Poggio. There won’t be Le Manie climb anynmore.

It’s important to evaluate how this climb will change the race: which are the characteristics of Pompeiana? To which cyclists the new course will suit better? Will fast rouleurs be able to be competitive in the final part of the race? Will the race be open to more solutions?

LAMPRE-MERIDA’s technical staff has already try to face these questions, also to the contribution by technical assistant Marco Marzano, who had performed a survey on the “new element” of Milano-Sanremo 2014.

“The climb seems to be able to make the race tougher – Marzano explained – After the medium difficulty first sector, the road began to become narrow in the approach of Pompeiana village, so it will be necessary to fight for the head positions. Then, leaving the village, the riders will face the toughest sector, with 14% of maximum degree.

A slight slope will then bring the group to the summit. The downhill is characterized by some hairpin turns, then a series of bends that can be approached at a high speed”.

These exclusive info suggested that the race could be more selective and so it could offer various solutions to a quality roster team such LAMPRE-MERIDA is.

In fact, if the race will remain suitable for fast rouleurs, the blue-fuchsia-green fast wheels Pozzato and Modolo will play their role as protagonists. Otherwise, if the new climb will cause a heavy selection, there will be chances for lively riders such Ulissi, Rui Costa and Cunego.

Taking into consideration these reflections, team’s sport directors is going to evaluate which could be the best selection for Classicissima: maybe LAMPRE-MERIDA will be at the start relying on a dream team. 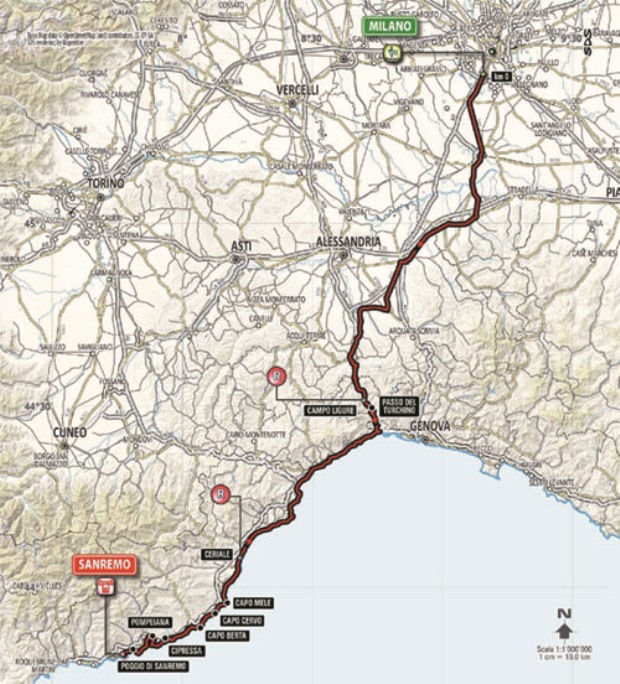 Rasch to be DS at SKY