Lotta Lepistö continued her impressive performance in her first Giro Rosa today after sprinting to second. The result is her third podium position after winning stage 6 and finishing second on stage 3.

The day ended in a bunch sprint after a late breakaway was caught with three kilometres to go. Marta Bastianelli (Ale Cipollini) won the stage. Lepistö credited her teammates for a great workload, getting her into a position to sprint.

“I wasn’t sure if I would survive the climbs in the beginning of the stage because a lot of other sprinters were dropped but I luckily survived then I started thinking of the finish,” Lepistö said. “Clara [Koppenburg] did an amazing lead-out for me together with Stephie [Pohl]. Lisa [Klein] brought me to 5km to go and Clara did a great job to bring the breakaway back in the headwind.”

Lepistö says she’s enjoying the Italian tour particularly after the misfortune the team suffered at the start of the race.

“I’m starting to get used to the heat and the climbs. It would have been nice to win today again but the tour is turning out to be a good one for us. I’ve never won anything in Italy before so it’s nice to see that Italy likes me and has nothing against me,” she said laughing.

With one day remaining, Cecilie Uttrup Ludwig keeps the lead in the white jersey competition. The Danish time trial champion assumed the lead in the best young rider category on the previous day’s stage. The Giro Rosa concludes tomorrow with a 124km stage that starts and finishes in Torre del Greco.

Photo: The top three finishers on Stage 9 of the Giro Rosa – a 122.3 km road race, between Centola fraz. Palinuro and Polla on July 8, 2017, in Salerno, Italy. (Photo by Balint Hamvas/Velofocus.com) 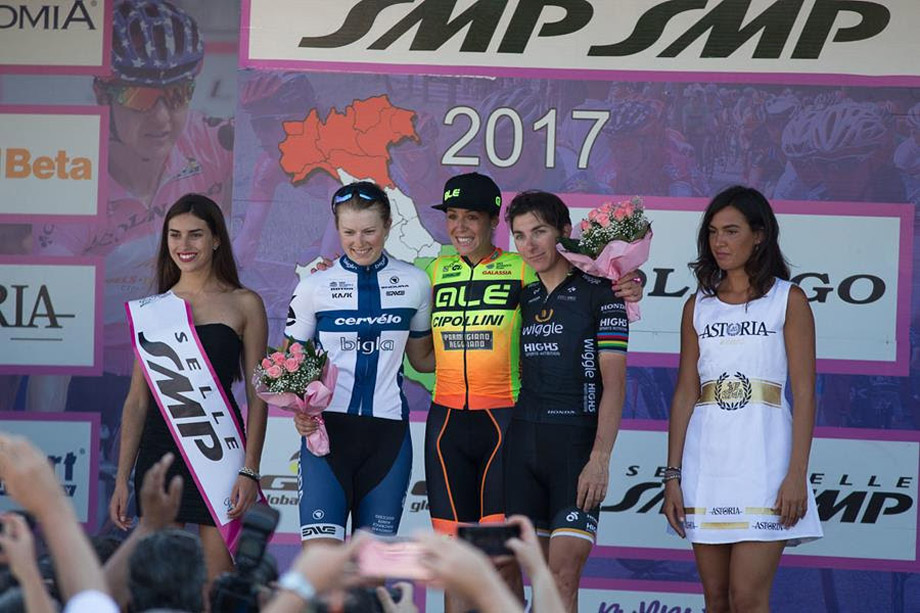