The 12th edition of the LONDON-PARIS with 400 riders representing 24 countries starts on Thursday 26 June. The riders will be taking on the challenging 500km route over three days, riding in 6 seeded speed groups, experiencing full pro style support and rolling road closures. The finish is in the centre of Paris, swinging by the Arc de Triomphe and finally the Eiffel Tower. This unique event is one where pros, sports riders and newcomers can ride in the same event alongside stars and celebrities. Whether riders are there for the race elements, riding as a sport for endurance or just riding to finish, all are supported by a professional crew of 260.

The event also provides a platform for young up and coming riders, especially those coming through the HotChillee Development rider program. Nicholas Dlamini, now riding for MTN-Qhubeka feeder team has come up through the ranks winning LONDON-PARIS as an amateur last year and the Cape Rouleur as a pro this year.

Sven Thiele, founder of HotChillee said “There is such a large focus on established professionals and very little infrastructure to support younger riders, particularly in places like Africa. With a reach of millions the LONDON-PARIS provides an enormous platform and network for these young riders. Nic Dlamini started, without even his own bike three years ago and now rides for MTN-Qhubeka as a results of this.”

This year sees a new potential star Shameeg Salie from the Western Cape. 19 years old and also new to cycling (less than 4 years). Like Nic Dlamini he has been mentored by UK pro Ben Swift. Both rode in a HotChillee 12 man 204km Team TT (Coronation Double Century) coming second overall in SA last year. Shameeg has been riding with the local Cape Town Giants and most recently signed a trial with local top team, Lights by Linea. He has represented SA on the track and has an amazing instinct for which breaks to be in, impressing the likes of Stephen Roche and Ben Swift at events. Shameeg will be riding for Wattbike at the event and his travel has been funded by the Western Cape Government who have been assisting young talented riders to come to Europe.

Stephen Roche said “ I thoroughly enjoy spotting and helping the younger talent. Shameeg is right up there and can hopefully follow the example of Nic Dlamini. With MTN-Qhubeka being the first African team at the Tour de France this has become even more meaningful and motivational!”

Stephen Roche will be accompanied by the “voice of cycling” Phil Liggett supporting his charity “Help the Rhinos” and Dean Downing who has recently retired from pro cycling. New to LONDON-PARIS is founder of National Braai and celebrity chef Jan Braai. He is the antithesis of a chef being extremely competitive and fit, having cycled at a national level in his youth. 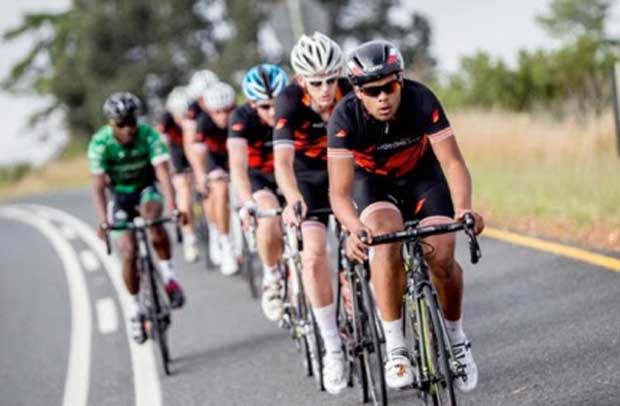 This edition of the LONDON-PARIS anticipates a fierce competition amongst the women riders competing for the Wattbike Amateur Women’s Jersey – which for the first time will be yellow instead of pink.
This year will see retired pro Dean Downing start in the 360NE Yellow Jersey (pro) with Matt Exley, Team Skoda in the 360NE Yellow Jersey (amateur) and Jurgen De Witte starting in the sprinters jersey.

The dates for next years event will be 26th -29th May – one month earlier due to the Euro Football Championships. 2017 will be the normal date again – 1 week before the Tour de France – however 2016 will see a new start venue and significant route changes, which will continue into 2017.
Registration for 2016 will open on 6th July 2016, with early bird opening on the 30 June.