Lotto Belisol and Soudal join forces again! After a successful cooperation during the Tour de France 2013, both parties continue their partnership and Soudal becomes cosponsor of Lotto Belisol.

The producer of among other sealants, adhesives and PU-foams with headquarters in Turnhout will be visible next year at the back of the shorts and on the chest of the Lotto Belisol riders.

That way Soudal, business of the year in 2011, becomes one of the structural partners of Lotto Belisol, next to both main sponsors and bike supplier Ridley Bikes. Together with the other partners Soudal wants to give the Belgian team the opportunity to reach its ambitions on the international cycling level.

Vic Swerts, founder and president Soudal: “We hit off well, Soudal and cycling. Building on the cooperation we had this summer during the Tour de France and our sponsoring in cyclo-cross with the famous Soudal Classics, we have decided to set a next step in road racing by becoming one of the structural partners of Lotto Belisol.”

“The Belgian identity which characterizes our company as well as Lotto Belisol, is a basic factor. That both parties, on their respective domain, want to play an important role on international level is a second link. But there’s more; the credo’s ‘working hard’, ‘long-term vision’ and ‘focus’, joined with a tangible result, are values that hog the conversation in our company but also in the team.”

“Soudal is active worldwide, among it numerous countries where cycling is practiced on the highest level. Australia, Spain, Turkey, Italy, France, Germany and Poland are only some examples. Soudal wants to seize this partnership not only to enlarge the reputation of its brand, but will fully support the team and make many contacts in the construction and do-it-yourself sector aware of the cooperation with Lotto Belisol.”

Marc Sergeant, manager Lotto Belisol: “I can only be very pleased that the cooperation during the Tour de France 2013 has resulted in a partnership for 2014. We have noticed that Soudal has set the step into road racing with a lot of feeling for initiative and that lets us hope the best for the future.”

“The past months we have tried to reinforce the team thoroughly on the sportive level and to put together a balanced core of 27 riders. Structural partnerships like with Soudal make that possible. Together with us they believe in the Belgian cycling project on the highest level and it’s up to us to show that their confidence in Lotto Belisol is justified.”

About Soudal
Soudal is Europe’s leading independent manufacturer of sealants, PU- Foams and adhesives for experts and for private persons. With a turnover of about 500 millions of Euro, more than 1800 employees in 38 countries and 11 manufacturing sites on 4 continents this 100% Belgian family company, where the founder Vic Swerts is still leading the company, has developed into an international player and expert in chemical building specialties. Intensive investments in R&D, a many year’s vision of innovation and adjustments to the needs of the local markets lay the basis for these excellent performances for which Soudal was recently awarded the prize of Business of the year 2011.”

About Lotto Belisol
Lotto Belisol is a Belgian World Tour cycling team with the ambition to play a leading role in international cycling. Through the development of a professional, scientifically founded structure within a long-term vision our riders get the chance to pursue their goals and dreams. Lotto Belisol wants to give specific attention to the development of talent through the U23 team and the ladies team. Thanks to the popularity of cycling our sponsors and fans can be part of cycling on the highest level. www.lottobelisol.be. 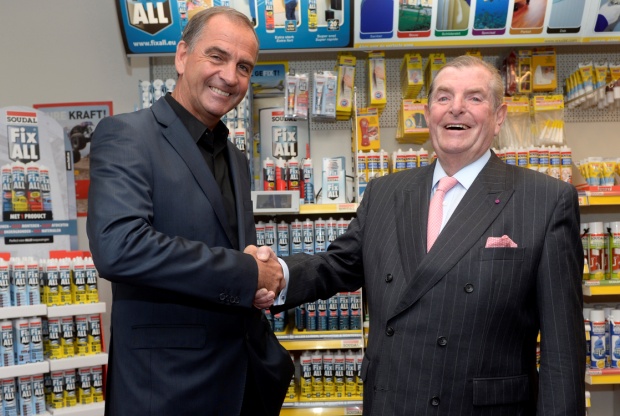 An Attractive and Stylish Design for the New 2014 OPQS Outfit