Before the start of today’s final stage the organizers decided to shorten the total length, but all climbs remained in the program of the day. With 141 kilometers to go from Pavullo to Roccapelago the team kept an eye on the action.

The race started of fast but no breaks were allowed to go clear. Only after 30 kilometers into the race Primoz Roglic (Adria Mobil) and Sam Spokes (Drapac) were able to open up a gap. They built up a maximum advantage of 3.30 minutes, when Bardiani-CSF decided to organize the chase. Their pacesetting helped reducing the number of riders in the bunch and when MTN-Qhubeka-p/b Samsung joined the action with around 40 kilometers to go it was down to approximately 15 riders to go for stage glory.

MTN-Qhubeka p/b Samsung’s goal for the day was the stage win and Louis Meintjes timed his attack on the steepest climb of the day to perfection. By then Roglic had dropped his breakaway companion but was soon reeled in by Louis who himself had dropped Damiano Cunego (Nippo-Fantini) and Davide Rebellin (CCC-Sprandi) who had been the only riders that were able to match his acceleration.

With 22 kilometers to go the reigning African Champion went for his brave solo and was able to extend his gap. In the end he finished the stage more than one minute ahead of his nearest followers, Cunego and Rebellin. Overnight race leader Ben Swift (Sky) came in forth, meaning that Louis had managed to put enough time between the two of them to also take the overall.

Louis Meintjes – Riders
This win really means a lot to me. It’s my first win in Europe and I have to thank the whole team who supported me at this race. They were always there and it makes me really proud. I hope this win also motivates people to help us and Qhubeka putting more kids on bikes in Africa.

Alex Sans Vega – Sports Director
The team did really well today. We were going for the stage win, but to also take the overall is brilliant. Our plan was to attack with 40 kilometers to go. And Louis was just phenomenal. He attacked on the steepest climb of the day and then just rode off. It was just a perfect day for us. 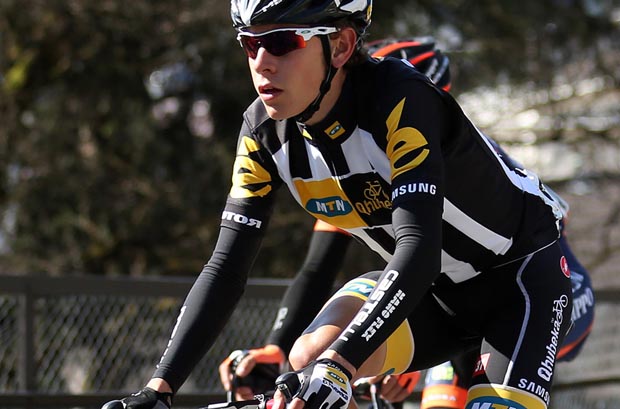