LTdL 2015 Route Returns to its Roots for the 20th Edition

From the legendary island of Langkawi to the East Coast and a fitting climax with the Genting stage coming on the penultimate day, the route for Le Tour de Langkawi (LTdL) 2015 will give cycling fans what they have been longing for again.

Even more interesting, this year’s race from March 8 to March 15 will be highlighted by two climbing stages in Genting.

Launched in Putrajaya today, the route ticks all the boxes in elements that have formed the basis of LTdL’s successful routes of the past – with a traditional start in the race’s birthplace of Langkawi, heading from the West to the East Coast of the peninsula where the following for cycling is massive and leaving the battle for the overall title to the penultimate day.

“In the earlier editions of LTdL, the Genting stage was usually held on the penultimate day. We think this helped build up to an exciting climax and this is the scenario we hope to bring back with this year’s route,” said LTdL 2015 chief executive officer Datuk Malik Mydin.

“We will have the most fitting start for the race, the Genting stage appropriately held on the penultimate day, which means the climax will be left till very late and then for the 20th edition we will also mark it with a return to the traditional finish venue at Dataran Merdeka,” added Datuk Malik.

The race has also been trimmed to eight stages from 10 stages between 2010 and 2014. This is expected to provide even faster racing covering a total distance of 1,104.9 kilometres. 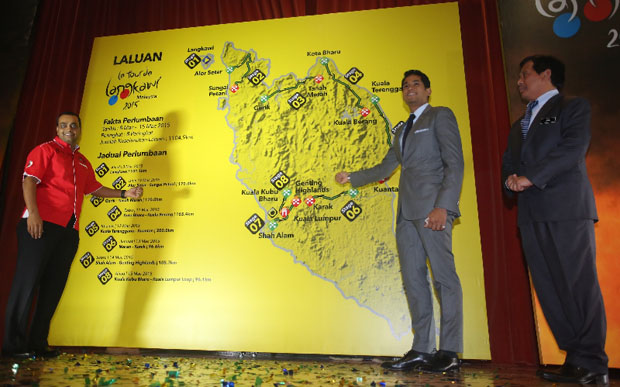 LTdL 2015 begins on Sunday, March 8 with a 101.1km stage around Langkawi set from the Underwater World in Pantai Chenang, then moves to the mainland for Stage 2 from Alor Star, the birthplace of LTdL founder Tun Dr Mahathir Mohamad, to Sungai Petani, which covers 170km.

Stage 3 again brings back the glory days of LTdL with what is regarded as the most scenic stage of the race – the 170km run from Gerik to Tanah Merah, which runs past lush tropical forests and marked with a tough climb to the top of the Titiwangsa range.

Stage 4 takes the peloton from Kota Bharu to Kuala Berang in a 165.4km route that is expected to finish in an exciting bunch sprint, before the peloton prepare for the Tour’s longest stage.

We then begin the journey back to the West Coast from Stage 6 with a 96.6km route from Maran to Karak, which should effectively begin the battle for the general classification and king of the mountains jersey.

Then we head to the stage every cycling fan has been waiting for, the legendary Genting stage on Stage 7, which starts from Shah Alam. This is where undoubtedly the race will be decided by the main climbers in the peloton.

The race ends with the traditional finish venue set back at Dataran Merdeka in Kuala Lumpur where the peloton will run a circuit in the city centre after a ceremonial start in Kuala Kubu Baru.

“Although shortened to eight stages this year, we believe all the elements required to make this an exciting route has been met. So we are looking forward to this edition of the race which we expect to be a fitting celebration of 20 years of Le Tour de Langkawi,” said Datuk Malik.

Organised by Human Voyage Sdn Bhd, the 20th edition of Le Tour de Langkawi (LTdL) from 8 to 15 March, 2015 is set to cover more than 1,000km over 8 stages, the UCI 2.HC (hors category) race featuring again as one of the biggest events on the UCI Asia Tour calendar. 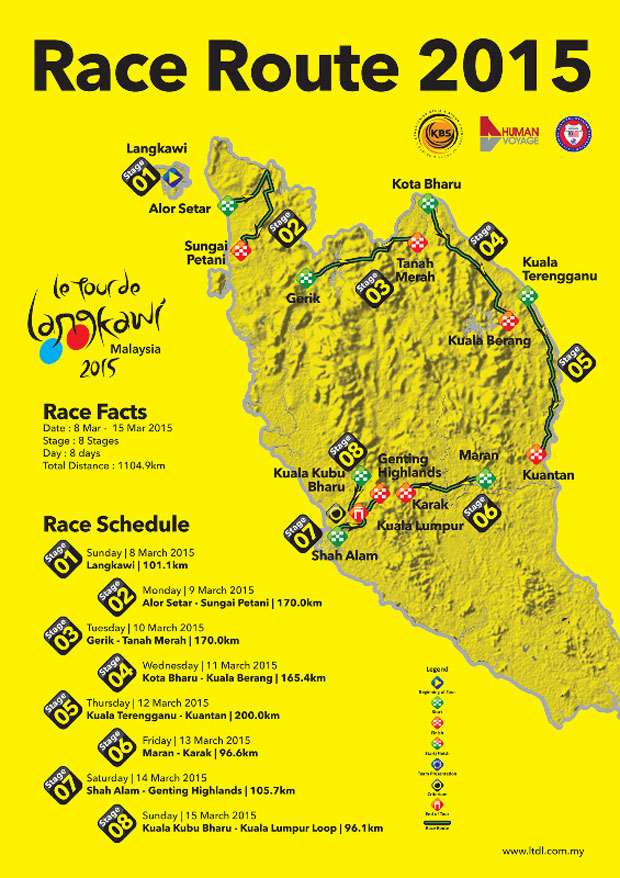 PEZ Down Under: The Day Of The Joey!

EuroTrash Down Under Thursday!