Luke Durbridge recovered from what he called a “disappointing time trial” on Friday to win the road race at the Oceania Championships in Toowoomba on Sunday. Durbridge beat fellow statesman Robert Power (WIS) to the line in a two-up sprint to claim the elite title as Power took out the Under 23 title.

“We took the opportunity that unexpectedly came at the end of the race,” said Durbridge. “If you had told me halfway through the race that I was going to win, I wouldn’t have believed you. There was a break up the road, and we thought that was the race gone and won. We weren’t expecting the break to come back.”

Connected under the West Australian Institute of Sport, Durbridge and Power partnered up against trade teams with numbers. The duo were two of only 32 riders from 206 starters that finished the 142 kilometre race.

“We had a bit of plan,” said Durbridge. “We were outnumbered, so we had to play off other teams. Drapac had 15 riders, and there were 10 from Avanti, so we knew it could be quite tricky.

“We tried to make it difficult during the first lap,” Durbridge explained. “From that point on, the break went away. We tried to close it a few times but never quite finished off the job. Eventually Avanti succeeded in bringing back the break.”

Twenty kilometres from the finish, following a flurry of attacks, Power jumped away on the climb. Durbridge sensed the move had staying power and bridged across to Power’s wheel. The duo quickly caught up to Wesley Sulzberger (Drapac), who was in a solo escape 20” ahead of the field. Sulzberger fell off pace set by the West Australians, leaving Durbridge and Power out front alone.

“I was looking for an opportunity when Robert attacked,” said Durbridge. “It made sense to follow him. We got away together, and that was it. It’s great for West Australia to take the U23 and elite race today.”

Durbridge noted that the length of the race, class of the field and weather conditions created a far more difficult day of racing than he anticipated.

“This is the first time I’ve raced a lot of these NRS riders,” noted Durbridge. “They made it a really hard race, and I wasn’t expecting that. It was short in that it was only 140 kilometres, so it full gas straight from the gun. Actually, it was full gas nearly all day. I was surprised at that, but it worked out perfectly for me.”

Durbridge heads back to Europe at the end of the month with a renewed sense of confidence for the season ahead.

“The time trial didn’t go my way on Friday,” Durbridge admitted. “I had a bit of a body break down. It was really, really hot. I was the fastest at the turnaround, but I overcooked it on the way back. My body started to shut down. My heart rate went up. I couldn’t really time trial the way I normally can on the way home. When I punctured at three kilometres to go, it was just the icing on the cake of a pretty bad day on the bike.”

“I wanted to make amends,” Durbridge added. “I’m glad I could do that today. It gives me good confidence going back to Europe for another season.” 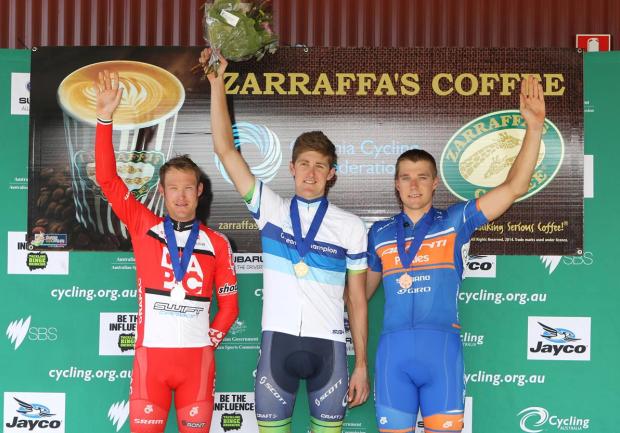