The world’s fastest cycling sprinter, Mark Cavendish, has written a second book At Speed: My Life in the Fast Lane. The book is now available in bookstores, bike shops, and online. Read the first chapter at www.velopress.com/cav.

Written off as “fat” and “useless” in his youth, Mark Cavendish has sprinted to the front of the Tour de France peloton to become cycling’s brightest star-and its most outspoken. Following his debut book, Boy Racer, Cavendish has truly come of age as one of the best cycling sprinters of all time.

In his new book, At Speed, the Manx Missile details what it took to become the winningest Tour sprinter ever, examines the plan that led to his world championship victory, reveals the personal toll of his sacrifice that helped teammate Bradley Wiggins become the UK’s first-ever Tour de France winner, and confesses his bitter disappointment at the London Olympic Games.

Screaming fights with teammates, rancorous contract negotiations, crushing disappointments-for Mark Cavendish, winning is always the cure. His book At Speed is the page-turning story of a living legend in the sport of cycling.

Quotes from At Speed

On his savvy with the press: “My press conference afterward was the usual, sedate affair: I announced to the world’s press that among them were ‘ignoramuses’ whom I’d been glad to shut up, threatened to sue a journalist…and finally semi-seriously admitted that we’d be there all night if I started talking about the ‘problems in my head.'”

On the Grand Tours: “If the Giro was three weeks of beautiful chaos and the Tour just a huge, slick, and scary machine, the Vuelta was the decaffeinated grand tour-with all the flavor of the other two but minus some of the stress.”

On his relations with the media: “[In one phone call], I’d served up yet more evidence for the already sizable contingent of people who thought I was a mouthy, arrogant, disrespectful little upstart.”

On Paris-Roubaix: “Imagine riding down a riverbed in a shopping cart.”

On his rivals: “Even before the crash and ever since I’d beaten him by millimeters to win Milan-San Remo in 2009, I’d had the feeling that he was harboring some sort of grudge.”

On team time trial strategy: “If anyone doesn’t want to listen, they can fuck off now.”

On life: “I was young, single, rich, famous, and only truly happy when I was on my bike. Something, I knew, had to change.”

Mark Cavendish is the indisputable greatest sprinter in cycling. With over 25 Tour de France stage wins, Milan-San Remo, the Tour’s points jersey, a dozen stage wins in the Giro and Vuelta, multiple Olympic gold medals, and victories in road and track world championships, no other sprinter in history can boast as many prestigious wins. Widely regarded as the most exciting and charismatic young rider to join the sport in years, Cavendish rode for the American cycling team HTC-Columbia and for Britain’s Team Sky, and now rides for the Belgian team Omega Pharma-Quick-Step. 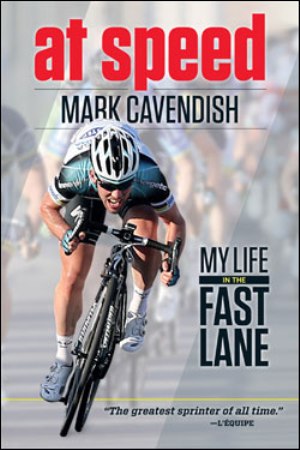