Omega Pharma – Quick-Step Cycling Team rider Mark Cavendish, who withdrew from the 2014 Tour de France due to a crash in Stage 1, visited his teammates during the second rest day on Monday. Cavendish was also present when the team announced it is secured until 2017, and will be named Etixx – Quick-Step starting in 2015.

“Now that I’ve been at home I realize how much I miss the OPQS guys and the Tour de France,” Cavendish said. “It’s been incredible watching them. I’ve watched some stages when my rehab and recovery didn’t interfere and it’s been really impressive, especially seeing them win the way they did with Matteo Trentin and Tony Martin. You can see the strength, the desire, and I still feel part of that even when I’m in my home watching them on the television. I’m super proud of them. We came here as a sprint team and to lose your sprinter in the first day, it can almost throw you into a situation of ‘what to do now.’ But all eight riders still racing the Tour are super strong. It’s easy to see how they’ve got along without me there with them. I’m still part of the team when I’m not here, and to see them pull it off the way they have makes me so happy. As for me, I had to make sure I was on top of my recovery and my rehab first before I could spend a couple days with the guys. I want to get back to racing for Omega Pharma – Quick-Step as soon as physically possible, and my days are full doing everything I can to optimize that. Yesterday I went out with my bike on the road for the first time after the injury, but as of now I can’t really say when I will be racing again. I will discuss it with the team in the next days. I just want to be here with my team right now and let them know how proud I am of they way they’re conducting themselves at the Tour de France, the biggest race in the world and one I love dearly.” 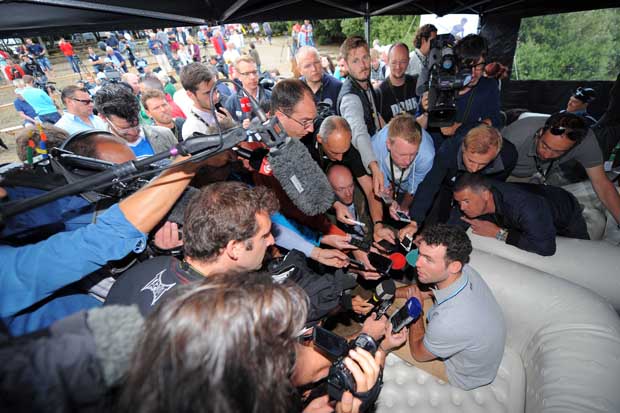