With the Dutch rider Martijn Verschoor in the day’s breakaway group, the ‘Changing Diabetes’ jersey was again perfectly presented. Verschoor went away with a group of three other riders after passing the famous town of Møgeltønder. “I thought we would have been caught early, but they let us go”, Verschoor recalls the situation after 70km. The maximum gap for the small group of five riders was 2:20 minutes, and entering the hard final circuit at Sønderborg, there were only 55 seconds left for the fight against the advancing bunch with the sprinters. Just about two laps into the last four, and around 12km from the finish, the group was caught by the bunch.

The third stage of Post Danmark Rundt – Tour of Denmark kicks off in Sønderborg at the Flensborg Fjord and follows the east coast of Jutland as it heads north to Vejle, the capital of the Danish region Syddanmark. At 200km, the third stage will be the longest and most challenging of this week’s racing in Denmark. The final kilometers conclude with a lap of 5.6km, an incline of 21% 800m before the finish and an average of 4% with 400m to go. There will be two ‘Changing Diabetes’-Bonus Sprints: after 97.8km in Skamlingsbanken and after 158.5km in Rauning.

Team Novo Nordisk rider Andrea Peron expects a hard stage: “For sure, it’s the the longest stage this week. I think the first part will already be very important. The track follows the eastern Danish coastline, and that means we’ll definitely have some wind, and, of course, there are some small but dirty hills during this stage, with a very hard one in the final lap. That means the bunch, or even just a part of the bunch, fighting for the victory has to do this executioner three times. First, I think there will be many attacks in the first part of the stage and a breakaway group that will definitely make its move. But for the final, the strongest teams will try to get the race again under control, and that means the speed will be very high. If you ask me, I hope they will have success and that the race will finish with a short, hard sprint of with a few riders, and we will be in this game. But it will be a very, very hard stage and a very, very hard final.” 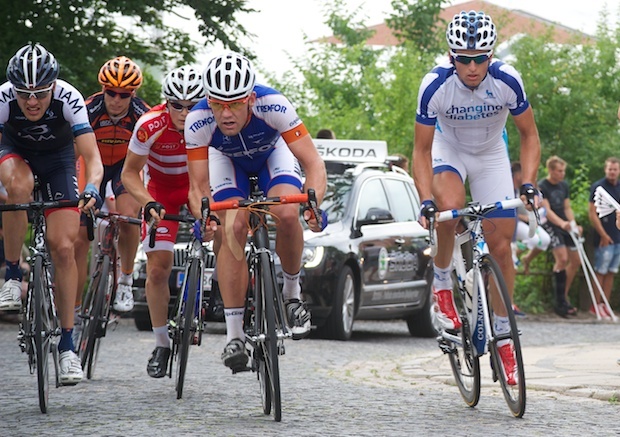