Matt Goss stormed to his first victory of the 2014 season, taking out stage two of the Mitchelton Bay Cycling Classic. On just the second day of racing for the 2014 season, ORICA-GreenEDGE set up their leader for the win with a textbook lead-out. Goss capitalised on that hard work, taking victory ahead of Caleb Ewan (Subaru NSWIS) and Leigh Howard.

“It’s really great to get a win so early in the season. We’ve got a super strong team here, the guys rode so well today that it was easy for me, I just had to step up in last 150 metres or so and finish it off,” said Goss. “Yesterday I jumped across to the break, and I really struggled to recover after that effort. That kind of intensity is a shock to the system at this stage of the season. I didn’t feel bad, but I just wasn’t good enough to capitalise on my position. I’m really happy to change that today.”

Stage two around Geelong’s Eastern Gardens played out perfectly according to plan for the Aussie team after they made clear their desire for a win after yesterday’s minor placings.

“We had a plan today. We knew there were no big sprinters in the top ten after day one, which gave us a great chance at the jersey. Our plan was to be aggressive and use our other guys so we could save Gossy for the finish,” said Sport Director Matt Wilson. “Hepburn, Howard and especially Durbridge were very aggressive throughout the race. Once it became apparent that it wasn’t a day for the breakaway, they switched focus to the sprint for Gossy. They did the perfect lead out; you always know you’ve nailed it when your lead out man runs third.”

While Goss stayed protected in the bunch and saved his legs for the final, ORICA-GreenEDGE used up all of their riders with a constant barrage of aggressive attacks throughout the stage.

“The whole team is going super strong here and they’re the ones that really set me up for the win today,” said Goss. “Durbo was attacking his own shadow today, he’s going so well. I actually had to get him to slow down for me in the break yesterday.”

“The guys were all exemplary today,” continued Wilson. “Durbo in particular is in super form, he was in every move today, attacked constantly and in the final he did the last three to four laps virtually solo for Gossy. So he was a huge part of the win today, and he obviously has super form going into the Nationals.”

Today’s win for Goss will draw inevitable comparisons to his emphatic 2011 season- his most successful to date- given that it began with a win and taking the jersey on the very same stage as today, at the Jayco Bay Cycling Classic.

“It’s nice to compare my win today with 2011, and I certainly hope it’s a sign of things to come,” said Goss. “I’m confident that my preparation has been right this year, but I’m looking forward to the next month of racing to see if things work out the way I’ve planned them, before I really start to draw any comparisons.”

“Today’s win is fantastic for Gossy, since it was a win at the Bay Crits that started his best ever season in 2011,” said Wilson. “We’re really happy that he’s on track with such good form at this time of year. Emulating his 2011 season would obviously be the ultimate for Gossy and for the team, so we’re hopeful that we’re on track for that after this win.”

With the jersey on the back of Goss going into tomorrow’s stage, the team’s focus will broaden to include defending the overall.

“It’s great to have the lead and we’ll try to keep the overall,” said Goss. “Mostly, I’m looking forward to getting out and racing in the jersey tomorrow, and I’ll do my best to hold it to the finish now. Tomorrow is a really hard day, but Durbo has won on the Portarlington circuit before, so we have a few good options on that course.”

“Tomorrow’s stage isn’t typically one for a bunch sprint, but it has finished that way before,” added Wilson. “It’s very hard to control, but given the way the guys rode today, we’re confident we can control it and hold onto the jersey. Now with Gossy in such a strong position overall, and Leigh (Howard) also up there, we are in an ideal position to go for the overall win in the series.” 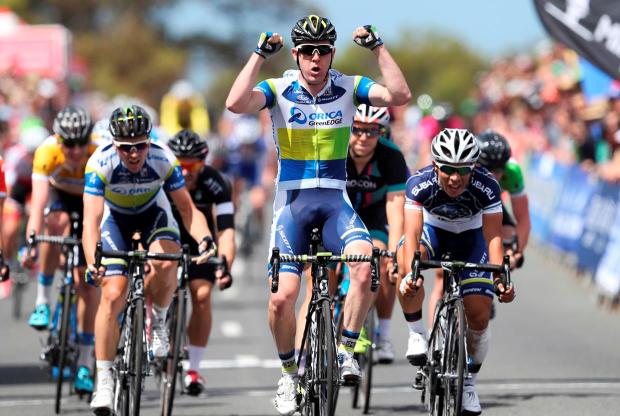