Matthijs Büchli has won gold in the keirin at the Tissot UCI Track Cycling World Cup in Pruszków, Poland. The BEAT Cycling Club rider crossed the line ahead of Joachim Eilers and Sebastien Vigier to secure first place in the final and take home the gold.

BEAT Cycling Club is writing history this weekend with the team’s first participation in an event at the highest level, the Tissot UCI Track Cycling World Cup. Earlier today, in the team sprint, Büchli and his clubmates Roy van den Berg and Theo Bos missed qualifying for the final for bronze by only 0.005 seconds. Büchli already showed great form in that race with an impressive split time.

In the keirin, Büchli clearly was able to continue at this level. “The Blast” won the first round with the fastest time of the field. In the semifinals he again finished first in his heat, ensuring a place in the final. In the final he crushed his competitors once again with a very early punch, blasting away to take the victory.

Matthijs Büchli was incredibly happy with this result: “This is crazy! I didn’t expect this, not now already. Winning a World Cup for BEAT Cycling Club is incredible. I went and didn’t see anyone coming with me, so I didn’t hesitate and pulled away. I don’t think I’ve ever taken such a beautiful victory.”

Coach Tim Veldt, at his first World Cup as a coach, was also very pleased with the performance of his rider: “I actually expected him to win. He was so strong today. A race like this is really difficult to plan, but he went early and had the ability to bring it home.”

Tomorrow Roy van den Berg and Theo Bos will represent BEAT Cycling Club in the sprint at the World Cup. 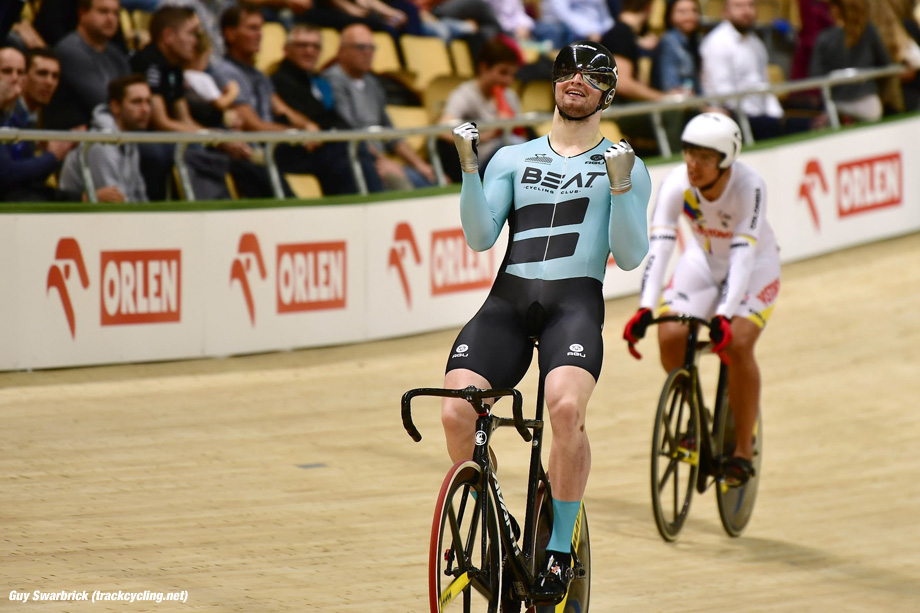